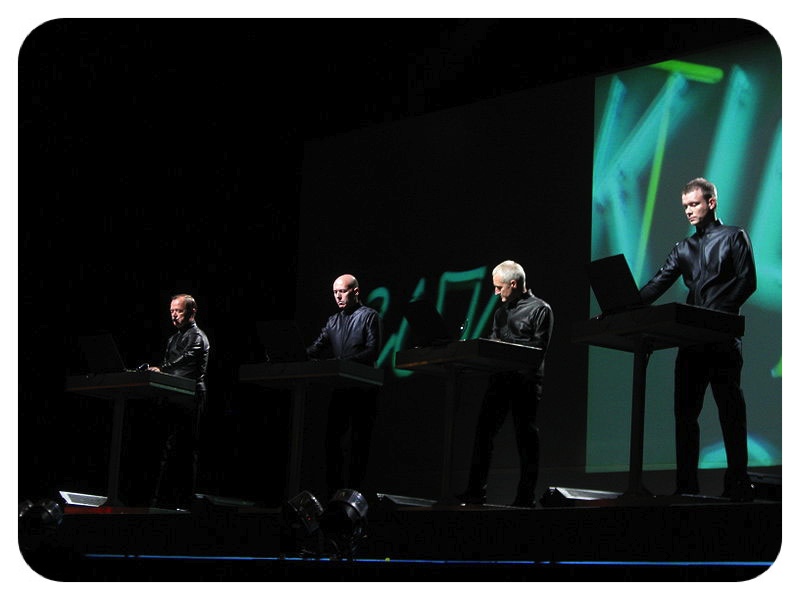 As part of this year’s Vivid festival, they have occupied the Sydney Opera House for the duration. Bunkering down, their master plan involved playing an album per show (with a greatest hits package thrown in for good measure.)

I have secured free tickets (thanks Travis) for the Electric Cafe (aka Techno Pop) show. It would be safe to say this is not their greatest album. It’s not their worst either (Its follow up is a dire - almost pastoral - ode to cycling: Tour de France). Expectations are understandably low. By the time of this album’s release, Gary Numan had stolen their sound, Joy Division had stolen their ties and Afrika Bambaataa had stolen their riffs. Everyone else stole their blippity blip noises and renamed them as every kind of new dance-breaky-garage-house-thingy under the sun.

It’s bloody hard to jump ship when your hull has been gutted. Once sonic revolutionaries, their sound was so co-opted into the main stream, they hadn’t had a chance to properly sell out.

It’s a cold Sydney night. Lightshows transform the city skyline. An enormous lizard scuttles over the sails of the Opera House. Crowds and hideous street musicians litter the promenade. A wall of paper lanterns shroud the foreshore. It looks like Ridley Scott has finally got the green light for a Bladerunner sequel.

We arrive and are handed 3D glasses so the back projections can poke us in the nostrils. Hilariously, I watch punters try to snap pictures of the phantasmagoria on their mobile phones. One genius even tries to take off her glasses and put it in front of the viewing lens. It’s all fun – fun – fun on this autobahn.

A line of elderly Germans march onto the stage and pretend to play musical instruments (or something). The music booms through a huge quadraphonic PA system and the sound travels around the room in co-ordination with the back projections. My guess is one of them might actually press a play button at some point. (He was born in Düsseldorf and that is why they call him) Ralf actually sings or kind of speak sings or basically just speaks the lyrics in a kindly old German kind of a way. You’d almost think I was going to give them an utter slagging or a review. How little you know me.

In spite (or maybe because) of everything I just told you, the show was tremendous... and it was, just that, a show. Okay, there were five old men in rubber suits standing in a line behind some dubious looking equipment. Sometimes they tapped their toes in a particularly granddaddyish kind of a style. But it was great and it was dead on in terms of keeping to concept. After a perfunctory run through of enough Electric Cafe songs to justify the Collection concept, they turned their computers to the heart of the sun and went to Greatest Hits mode.

“Autobahn”, “Radioactivity”, “Trans Europe Express”, “Space Lab”, “We are the Robots” and “The Model” represented one of the best 45-60 minute runs of songs ever performed on a stage anywhere. Even as we descended into later album hell, the entertainment continued (though I remain unsure about 3D Lycra clad cyclists pushing their virtual nether regions into my face.) Curfew arrives and the men machines depart. The crowd roars for me. Ralf returns to tap his watch.

“Do you people not have to work?” he asks in his best Colonel Klink accent. “We are working tomorrow. I suppose we could program one more.”

And who said Germans couldn’t be funny?