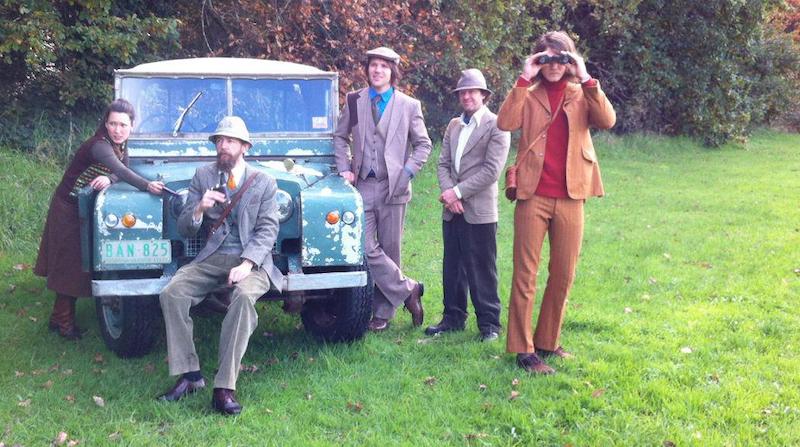 Five Minibikes and a Land Rover with not a Beemer in sight.

I digress. So far Northcote has managed to avoid the live music attack that has befallen other inner-city suburbs. Mick Thomas, still sometime leader of Weddings, Parties, Anything, bought a Westgarth (still south Northcote to some) café, put some choice boutique beers on tap and turned it into the Merri Creek Tavern. It’s cavernous, like all good bars are, and the band room is cosy enough to cause you to make many more friends than you thought were beyond your social capabilities.

Minibikes are playing here tonight and it’s the second time I’ve seen them, both times at the Merri Creek Tavern. I’ve missed the first set due to domestic television commitments, and arrive just as they’re covering Mental As Anything’s "Live It Up", following Greedy Smith’s most untimely passing. It’s such a bittersweet song, more happy than sad, and swamped with pathos.

From there Minibikes can’t miss a beat or, more significantly, a melody. It’s like if Hall and Oates were a vehicle for good, not a by-word for evil 70s schlock, if Dire Straits had avoided Californian mush for New York edge, if the LA music industry had heeded Nancy Reagan’s warning and stayed clear of the Columbian marching powder.

There are pop songs so sweet they should come with a Heart Foundation warning, a song called "Robert Fripper", for frip’s sake (though a personal favourite is "Ooo Woo Hoo Hoo"), a vague hint of Johnny Marr’s bouncing guitar riff in "This Charming Man" in "You Break My Heart", a bit of Wreckless Eric for good measure, that splash of innocence and hope that confirms that the well of pop music hasn’t run dry just yet, if you’re only prepared to get over your condescending attitudes toward anything that was written after 1987.

The night has more to come, so it’s on the bike and around the spurs of Rucker’s Hill to see underground Tokyo band Stompin’ Riff Riffs at the Northcote Social Club. 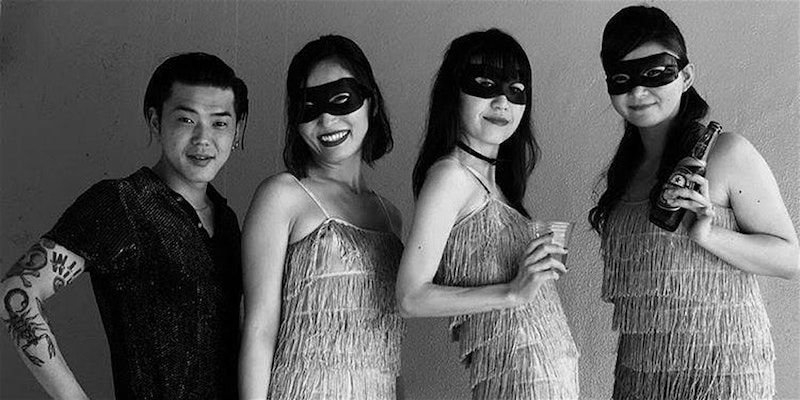 The crowd is thinner than I’d expected – always the way on Meredith weekend – but everyone there knows what to expect: Chuck Berry riffs, Pacific Northwest vocal squalls, thumpin’ beats and general dancing frivolity.

Like the first Stompin’ Riff Raffs album suggests, it’s a man (Nao) and three chicks (Rie, Miku and Saori), all wearing Zorro masks – the white tuxedo-clad Nao dispenses with his cheap facial disguise early – with the female members in matching fringed frocks (trying saying that when you’ve been drinking and dancing too long).

Everything old will always be new in the right hands, in art and life, and so it is with Stompin’ Riff Raffs. It’s fast and frenetic, wild and insane, vibrant and excited. Miku seems to have some minor technical dramas before her portable theremin gets wound into action; I’d never seen a theremin solo like this before, so there’s that off the bucket list.

Nao has the Chuck Berry knock-knee thing down-pat so well he might earn himself a cease and desist letter from some shyster legal type, and Saori belts the living bejeezus out of her drum kit.

The setlist suggests the good, the bad and the jump scaring of a B-grade horror narrative – wilderness, dancing, surfing, witches and vampires, screaming, screaming on wheels, phantoms, ghosts, even heavy sick. No piranhas or possessed dolls unfortunately but there’s always another album to come.

There are those moments when you exit the Earth happy, and the street fighting cover of "I Wanna Be Your Dog" that opens the two-song encore is one such moment. Gee golly fuck that was good, so fucking good, in fact. There’s another song – the setlist says it was "Victor", but in truth I’d gone to a higher plane where the indulgences of middle-class life had been banished from view by the beauty of pop music and the attitude of garage punk, so I can’t remember much else.

Who needs off street parking for your two four-wheel drives when you’ve got live music up the road? Check your privileges.