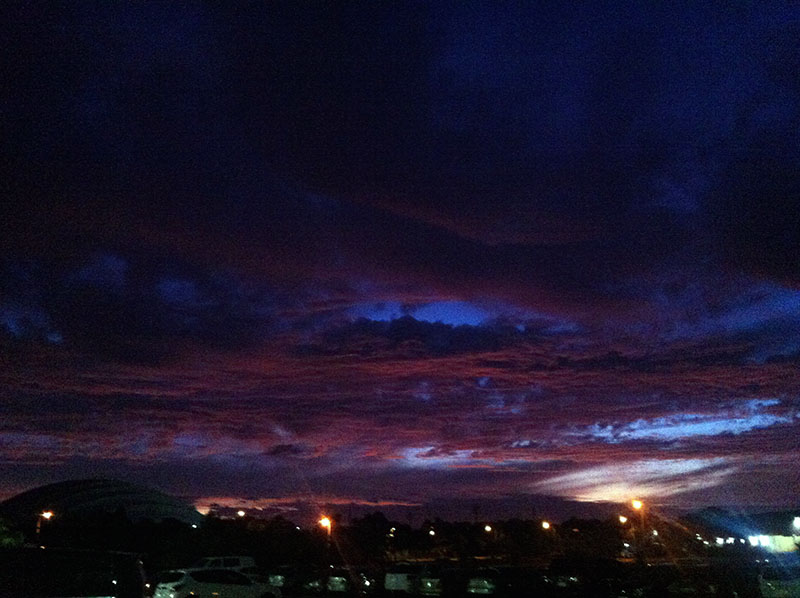 Tonight, The Lincolns host "A Very Lincoln Christmas". They booked the place months ago, and the place (30 tables of 10) was solidly booked out months ago. What the punters got was: table, access to increasingly crowded bar, food platter for the table, a 20-piece choir hired especially for the occasion, two sets by The Lincolns (interspersed with a raffle draw, Naughty Santa and his Dirty Elf - careful when you're dipping into the Dirty Elf's sack, folks) followed by The Memphis Suns.

This can only be a short review because I could only see one set of The Lincolns before scooting off across town to a 60th birthday which I also couldn't miss. But I couldn't miss The Lincolns, either.

Erm. Well. First, a chum of mine is in the band, and I'd been keen since he joined them. Trouble is, in some ways they may as well be an overseas band for all the opportunity I get to see them. They've toured Europe about three times, are always off interstate, and locally, they don't play the usual haunts at all, but odd places, often out in the burbs or countryside. Also, every venue The Lincolns play will pack out immediately the gig is announced, and also, they need a sizeable dancefloor, because you never saw so many twirling ladies and groovin' blokes in your life, not outside an actual competition.

So I turn up, am immediately grabbed and hustled out to the green room and shanghaied into wearing a tie and tie-pin. "I can tie a tie," I protest, as I'm swung around and a pair of talented hands reaches around ...

"Windsor knot?", comes the pitiless rejoinder, and, my mouth flapping, the hands hoick and tweak and behold, I am wearing a snappy '50s style thin tie with a fetching blood-red tie-clasp. Apparently I am now almost suitable for public exhibition, and so we head back into the chattering throng.

The Lincolns don't use the green room. They could, of course, but they don't, choosing instead to mingle with their friends and keen followers, all of whom know them. Hands are shaken, many people suddenly happy, happy to be in their company.

So, speaking of the followers.

They make punks, goths, ravers and new-wavers - of all eras - look drab and dowdy.

The ladies - of a variety of ages - wear skirts and blouses with such as big lary cherry motifs, bursting roses, lewd pink flamingoes; polka dots are popular, while one lady appeared to have been poured into a mirror.

The blokes wear bowling shirts with cheetah strips, or Hawaiian shirts (some with extraordinarily unHawaiian motifs - such as Monaros, burning hell, and classic Santa faces), or classic Golden Breed shirts. Fifties style short sleeve shirts and patterns were prominent as well, and Kramer would not have looked out of place.

The Lincolns took the stage and, within a few seconds of their arrival, couples were hurrying onto the dancefloor; within a minute of the first song beginning, fully 30 couples are bouncing and throwing themselves around. There are never less than 16 couples on the floor and, while people can't dance forever, some retire for a breather while others take their place. There are couples dancing in the aisles, behind the stage, and basically anywhere they can find a spot; of the retired couples, the man heads for the bar...

The Lincolns, I like what I've heard. Sure, they dress the part, modern drape suits, ties and bouffant quiffs, and that's a big part of their appeal. But in the end it's down to the music and the performance. They're not some aggro Fifties reinterpretation; nor are they a purist retro outfit. What they do is just great, great fun; Teddy Boy rock'n'roll (minus the violence and riots, it seems).

This is what 'The Fifties' have become, rather than a kind of lame '70s interpretation of the period like the latter seasons of 'Happy Days', they've merged and morphed and become a modern subgenre, rich with implied possibility which allow us to get away from the stultifications of the present, and into a better reality. 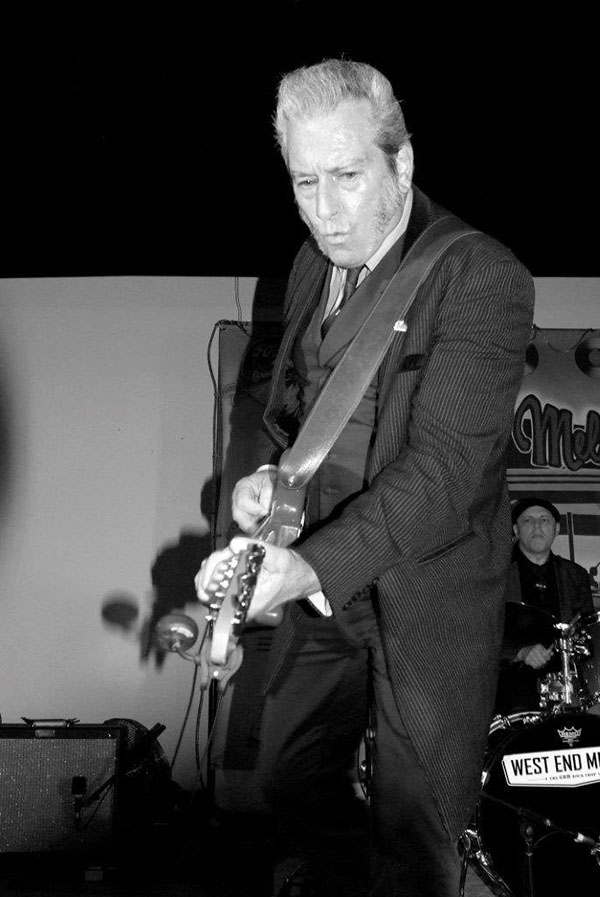 Lee Lincoln is next, rhythm guitar and vocals. He spends his energy concentrating on playing and singing - and if you know much about the Fifties style of vocal, you'll know there's a lot to do ... it's not as simple as it looks. Not only does Lee have a fine, varied voice, he has the phrasing down too - and that's a high compliment by the by, many modern singers can't put their voice through such gymnastics. Side-on, Lee's profile is as striking as the prow of a ship.

Walter Lincoln, with his black flat cap, is on drums, and he and the next chap, Kingsley, are rock-steady. Hell, the whole band is ridiculously tight, they barely glance at each other. Everyone is exactly where they're s'posed to be. Kingsley dances up and down as he's playing - no, not a double bass - which allows him to interact with members of the crowd. Walter, meanwhile, simply looks like he's having great fun after stepping out of an Ealing comedy where he was pinched for nicking a motor down White City Stadium way.

The songs? Well, you'll recognise some of them, because they're covers. But the others ... well, you'll recognise their content and style, but then you'll realise you're not familiar with the song. In some cases, The Lincolns' original is definitely superior to a cover. Which again, is high praise for a band with one foot deep in a stylisation, and another in a modern world.

There's little more I can say except that you need, as a matter of urgency, to getcha butts to The Lincolns, or at the very least get their CDs, T-shirts, and patches.

It's a big night, and while I gather that every Lincolns night is a big one, when the band bounce into Gene Autry's "Here Comes Santa Claus (Down Santa Claus Lane)" is when their first set comes to an end, as Naughty Santa (strangely lacking his famous tum, perhaps he 'works out') and his Dirty Elf (clutching a bilious green sack) caper their way to the fairy grotto, dripping with cotton wool.

As The Lincolns leave the stage, I notice that above them had been the Croatian coat of arms.

And, as I leave, the sky looks purple and red and thoroughly irritated that I am taking my leave; I headed across town where the Greek music and dancing and carousing continued into the wee hours and my photographer danced in her superbly inappropriate three-inch heels for several hours and pondered why her feet were sore and throbbing.

I wonder if I could get The Lincolns and the Greek community together...? or ... would that be just too dangerous?

If you want to see The Lincolns, you'd better get your finger out. I've been told that their gigs for 2019 are selling fast here.

I'll see if I can take the photographer to a few Fifties dance lessons.