So, this Sunday arvo, amidst a flock of Hills residents (they don’t get down to the city much … going up to the Hills can be a little like taking a walk on the H.V. Morton side via The Sentimental Bloke or something) with kids and grandkids zooming about, we had two excellent home-made soups, hoummos, pita bread, crusty bread and butter and kalamata olives (nothing served in anything inappropriate, these people were hippies before hipster) for a total of $15 (for both of us) and probably too much red wine (the Barn has a b.y.o. licence)…

The website tells me that the Barn was ‘the old horse stables for the Victorian homestead Wairoa which, among other owners, belonged to the Barr-Smith familiy and served as their summer house for 30 years’. The Barr-Smith family were prominent for many reasons, the most major which has affected me is their patronage of the Adelaide University Library, which also bears their name. The Barn’s next gig seems to be Lucie Thorne on July 29. 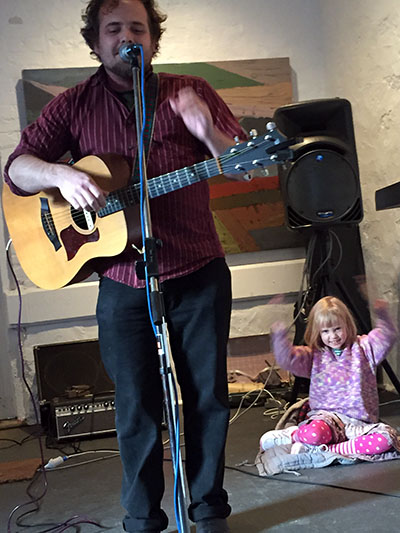 We’d seen Cabin Inn and Michael Plater last night at the fabulous Metropolitan Hotel, where we had to leave early; one of us had a headache and the other had been guzzling booze all afternoon after a rather emotional week (it wasn’t me, honest) which meant that I had to apologise profusely to the two Toms, Tomway Armie (in particular) and Tom Redwood, both men who I admire enormously and secretly harbour a desire to have them cloned sometime in the near future. In my defence, I was so useless that I was snoring 20 minutes after leaving the venue.

I confess I’m a fan of all these people. Not just because I can walk up to them and say hello and not have them instantly call a bouncer, but because I love the music. But, to qualify, while I do know a lot of people who make music, I don’t like the music because I know them: on one occasion I’d avoided expressing any opinion of a good friend’s band for over six years because I’d seen them and walked out after five songs (they were excrement of the last dirty water) and every time I heard the band on the radio they caused a similar reaction. But I’d maintained the friendship… until he realised that he hadn’t seen me at their gigs, ever, and asked that appalling question … “Don’t you like my band..?”

I told the truth, more fool me… but this is the kind of idiot reviewer I am.

The crowd today is, as perhaps you’d expect on a Sunday in the Adelaide Hills, not quite the same as you might find at The Tote, for example. So, over the small bin reds, Southwark Darks and Coopers Darks and bowls of steaming potato and leek soup people genially chat while Rossco and Michael Plater and Tom Redwood pour themselves out on stage.

The thing is, the nature of the place is that … well, it’s not like at a movie where you twat someone for yapping. There’s a real vibe here today, a sort of cosy, relaxed, human sort of thing. Almost like a village atmosphere. The people running the Barn should be congratulated by the way - this sort of thing doesn’t always work. Here, not only does it work, but it flourishes.

For those unfamiliar with Cabin Inn (you can find him on Facebook under the name Rossco Jalapeno) he has a knack for spontaneous song construction, which causes great befuddlement among those who expect someone to walk out, deliver a tightly-rehearsed set, beg for audience adulation, and come back for the obligatory 1.5 encores. This is the first time Plater and Rossco have played the Adelaide Hills, and apart from us, I don’t think there’s a soul here who’s seen them before.

Never appearing to do the same piece twice, Rossco sets up repeating guitar lines, often achingly beautiful, which provides a background for him to react against himself. His music - and vocals, today was the first time I’d heard him sing - veers between sumptuously grand and withdrawn and contemplative. This afternoon, he has his little box continuing to repeat several different lines as he…unplugs and packs away his guitar. Then he takes the mike and crouches down, and sings. Then, he puts the mic back and slowly deconstructs the guitar lines. Unutterably gorgeous, and completely un-rock’n’roll. Hell, it borders on Miles Davis in the ‘80s. Yet … Rossco is completely, fully rock’n’roll.

The crowd had been fully digging this, and they were most appreciative.

Now, I’ll just give you a couple of links, first to Cabin Inn, whose new LP “Forherver” should by now landing in your computer.

Rossco has a new 7” vinyl single, and I gather he didn’t have that many pressed: get on to him…

Michael Plater joined Rossco and mostly played songs from his recent LP “Mythologies” (which is bloody good, by the by), along with a cover of Tom Waits’ "Singapore". Live, Plater tends to … move his songs according to the night. There are subtle differences, sometimes only in built-up tone or intensity, tho often greater risks are taken. His instincts are rarely wrong; Rossco had never even rehearsed “Singapore” before today, for example, and I wasn’t sure he’d heard the song. But … what he came up with to counter Plater’s structure, was compelling, powerful.

If you’ve not had the pleasure of Plater’s music, then, two things. First, don’t expect this to be in your face and grabbing your attention. Hell, I didn’t get it at first, but the second time I saw him, I was hooked.

Second, the sheer simplicity of what Plater’s doing up there, few chords over and over, is carefully considered. What happens is that, like a large swathe of ocean, there’s this long linear build-up, and finally there’s some sort of wave. But it’s different every time. Like I say, Michael Plater is compelling, hypnotic. You don’t think there’s much going on … then you realise there’s a captivating complexity just hovering in front of you.

The crowd loved Michael Plater. Even the kids (tho’ most of them were just outside playing basketball and climbing things they shouldn’t).

Next up is Tom Redwood, who also lives in Melbourne these days. His daughter Annie steals the show as she wanders back and forth from the stage, occasionally dancing with Daddy, or peeping out behind him, or opening and closing the door at the back of the stage. Surprising how wonderful this is, and how profound a contrast this is with his songs. One of those never to be repeated moments…

Since Tom thinks of his music as folk, and after all this is the Adelaide Hills, he (and his guitarist Keith Davis) goes down a treat. Truth to tell, they don’t sound the remotest bit folky to me, although it would be equally ridiculous to think of him as a hoary old rocker (even if his last band, Adelaide’s mighty Leather Messiah, were even more hugely rockin than their name suggests).

Put simply, Tom plays songs which he delivers with extraordinary eloquence, intelligence and restrained power. His is the most obviously personal of the three sets today, mostly due to the manner of his delivery.

Tom’s last disc is the “Mexican Food” EP and the LP before that is “Look!”. Both are also available on CD… his first LP, "Back to the Brain", is also something of a neglected classic.

I forgot to mention, each of these men have wonderful voices: we didn’t hear that much of Rossco’s, but both Plater and Redwood both possess that wonderful talent to bring you into their own world, their own interiors… it’s a wonderful end to the day.

While I’d happily fly to Melbourne to see these fabulous musicians, I know a lot of people in Melbourne who simply don’t know how lucky they are …