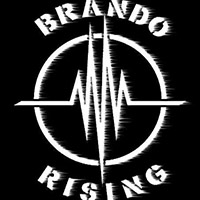 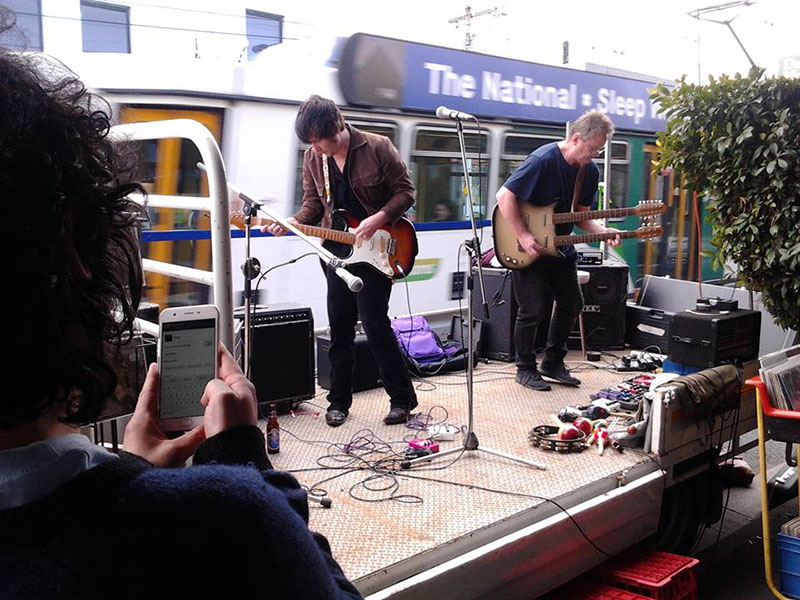 Dean Richards (ex-Whirlywirld, now Disturbed Earth - check them out)  is on the back of the truck, wielding a Danelectro twin-neck mated with a Vox acoustic amp with 18 (no, really) pedals - all of which he uses - and is making the most beautiful music.

One song is Cale’s "Amsterdam"; he ends with Can’s "Mary". Trams clang past, dog-walkers lug reluctant canines past, students scurry past with the faces to the ground with mobile phones jammed against their ears. A few punters roll up to buy some records and stick around.

By this stage the wind is cutting quite sharply amongst the watchers, who huddle against the shop window like smokers or similar pariahs. Soon some beer turns up and one or two quietly sip as the musicians and bands come and go with astonishing rapidity.

Tony Millman appears next, wielding what I think is a guitar (it looks a bit like one, beneath the weird paint) - no, it must be, it has a price tag dangling from it, as if Tony had either just bought it or was proffering it for sale. I dive for the safety of the shop and rummage through the CDs (as it’s going to be a bit too hard to lug half a shop of vinyl back to Adelaide in my pissy little bag) as Tony plays - he’s damn fine. I really enjoy his set and, my purchasing binge over, I catch the last couple of songs of his rather short set - a brilliant original called "All the Way Down". Here’s a link to his music.

By this time I don’t think I’m going to make it without fortification, so I dive inside the un-flash and un-prepossessing cafe next door (Thangs @ 502) (that’s 502 Lygon Street) where I have a fantastic hot chocolate, then get all excited and order mushrooms on toast. While this excitement is going on, The Giant Moths are setting up and I catch up with a couple of friends. The Melbourne music scene is still like that.

The chap who runs Muscle Shoals Records, Marsden Williams (who has one of the most enviable names I have yet encountered. C’mon, wouldn’t you like his name? Sod this Steve, or Craig, or Wayne, or Robert crap. Marsden. I can’t think of a better first name (except possibly Troy) was drafted in on bass (here’re the chords, good luck) and the Giant Moths start up.

I am rather thrilled to hear a distinct Can-like quality in the bass and drums - there’s a definite groove going on there which allows the band’s leader, Andrea Scarlett to layer over the top with everything from vocals (which reminded me a bit of Dagmar Krause; she has a fine range), flute, violin and a 12-string Ovation. The Giant Moths have a CD EP out, it is also mighty fine.

Dean Schultz was up next and his fine blues held little appeal because, irrespective of how good it was, I’d had a phone call from a friend from Adelaide who’d kindly called me up to tell me about the passing of Charlie Tolnay. At this point Michael Plater, who was playing next with Dean Richards, stuffed a fucking video camera into my hand, ordered me to "point it at me and make sure you make me look really handsome".

So I had a look through the viewfinder and, finding lots of flaring-out light realised I’d end up making him look like one of those godlike figures in films… for the entire set. So I did.

Michael and Dean clambered on board the back of the truck and delivered one of those rather wonderful performances which only they can do, power, grace, subtlety and ending with a slight tsunami of feedbackery.

Next up is Nick Batterham, who wields a … well. An acoustic guitar and a lopsided grin. He’s brilliant. I generally dislike folk music for the same reasons most people dislike it - when it’s waffly and doesn’t speak to me it’s just junk. Batterham is fantastic.

About half-way in to Batterham’s set, two cops roll up, clearly having been called by a passerby horrified by the proceedings which were obviously about to degenerate into a riot. Batterham was quite amused - I mean, his music was about as heavy and threatening in volume as next door's budgie.

The cops told us we’d be fined if we drank on the street and Marsden invited us all through the shop and out into the back yard. There was much amused laughter and, rather than haul us all into the back of the paddy wagon (as in days of yore, where we'd be arrested for "dangerous dancing" and "looking peculiar"), the cops spoke sternly to us as if we were about six-years-old, wagged their fingers and ticked off. 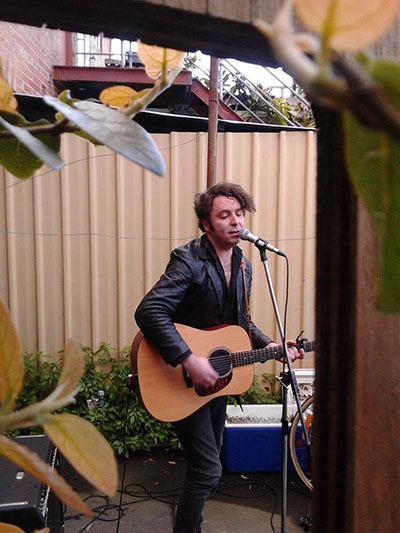 Around about this point alcohol became involved and, while I can recite the names of the musicians who followed, and enjoyed them, they were essentially background to my red fuzz: Rosie Haden, Mia Schoen, Johnny Livewire (pictured right) and the Hornstars… I do apologise. Next time…

Sometime during the red fuzz, Ripley Hood and his partner Marina arrived, along with the rest of Brando Rising including Adelaide’s Kelly Hewson; by now I was enjoying myself thoroughly (and thankfully Marsden didn’t call the police back) despite having strapped to a chair and had a goonsack of red tipped down my throat by Plater, Marsden and that bounder from Beat Taboo, Pange Neimoller.

Ripley is a consummate performer; it is said of him that if you give him a nudge and say, ‘oy, over there, Rip, a stage’… well, he’s hurtling stage-wards to wow a crowd. Mushroom Planet have a new CD out and it’s a cracker (review follows - or hear it on iTunes) but tonight sees the second gig of Rip’s new outfit, Brando Rising.

All you need to know at this stage is that they were fucking great rock’n’roll, enthralling and exciting. The band don’t really sound like anyone else, and there’s a distinct air about them. Rip can work a crowd with ease, strength and a sense of familiarity so often lacking in bigger bands; but with the particular skills of the bass and drums, and Kelly’s attack, everything coalesces and burns. Frankly, Brando Rising is like watching stardom hatch.

Realising that I was rather far gone and that hustling to the Catfish to catch Hugo Race and Michelangelo Russo was somewhat beyond me, I negotiated the road and successfully fell into a cab, which miraculously deposited me at the place currently putting up with me, the Lord’s and Walker’s.

When I woke up, I found I still had my CD purchases and a poster for the gig.