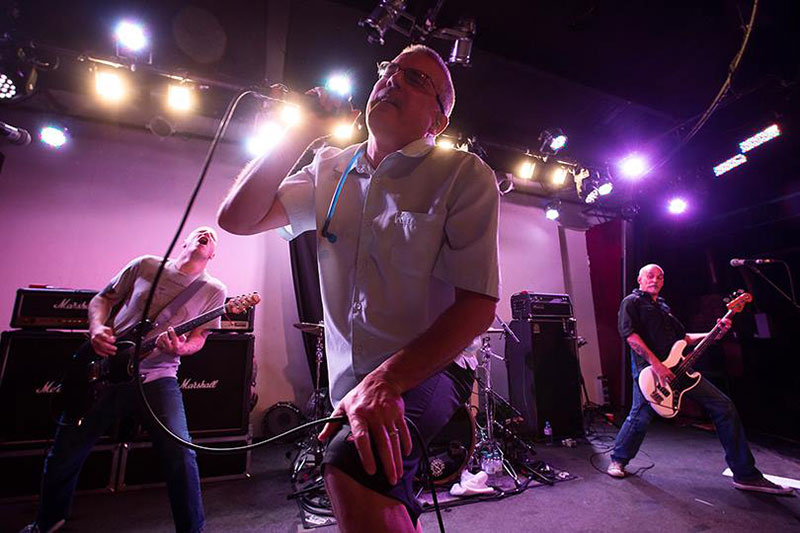 The Descendents
+ The Clowns
The Gov, Adelaide
February 16, 2017
Photos by Andreas Heuer of AV Photography

“Which bad review was it?” I thought. “Come on, there’s only been a few… Anyway, who has the clout to…?”

So we were told to get out. There was talk of a bomb threat. But surely we wouldn’t be kept next to the bloody tram if the threat was real..?

Passengers scurrying across the road were gently but firmly shepherded back. We were requested - firmly but with that relaxed amusement only Aussie coppers can muster - to provide photo ID and our phone number.

We texted partners, Tweeted dolefully, Facebooked bemusedly. Finally free, we realised the tram was going nowhere so, leaving Rob and Ocky to a grim fate, Dimitri and me sodded off to find a cab.

So. I was in no frame of mind to write a review last night. Sorry about that.

Huge shout out to the cops, though. They know how to exercise authority without being dills, got everyone hopping through hoops without effort or complaint, with a resigned and patient air.

Huge shout out to the bouncers at The Gov, too. The Descendents come from a time and place aped by thousands of violent fuckwads who fly through the air with the greatest of ease and cause so much damage when they land, so the crash barrier was quite emphatic for such a small place.

And the bouncers watched carefully for the dickheads - of which there were none that I saw (rather remarkable). Any mildly inappropriate biffing resulted in verbal or expressive apology. Mind you, I believe someone was stretchered out with a busted leg, quite unintentional, I’m sure. Whoops-a-diddle.

The support band, The Clowns, from Melbourne, I confess I didn’t much like. They’re a rock band, basically, and the musicians are tight, tight, tight and really tuff. Within the confines of that genre, they do take a fair few risks. And they sound damn good. I kept coming back to watch on that strength, but kept turning around. Maybe it was the wrong venue. While they did have some obvious fans in the throng, they won far more over. You’ll have to check them out for yourselves to make your minds up.

Well, they’re the first band I’ve ever seen who actually reminded me of a place where the Ramones came from (er, no. Not NYC.). I never really dug the Hard-ons, enjoyed Mach Pelican and then there’s The Spazzys (no, please no); all of whom people will nod and accept the Ramones influences there (you’d have to be blind and deaf to miss ‘em).

But the Descendents are not from that era, not really, yet in the midst of all the yelling and slamming and circle-jerking in So.Cal. in the late 7ts and early 8ts, they found their voice was one of sarky getfuckery with a distinct pop sound, harmonies and all, with frequent deadpan delivery rather than the manufactured anger so many punker outfits seemed so keen on.

They were very, very good. Musically tighter than you’d expect, strong and muscular, yet funny as hell without being comedy.

Egerton. What’s he look like? Well, a maniac British football hooligan from The Den, if you want the truth, gurning and grimacing all over the place. Another comparison might be if you were to remove Gene Simmons from his makeup, his stinky bat costume, all of his hair and stuff a guitar in his hand. He looks like he might breathe fire at any moment.

Oh, he plays bloody good, too.

Alvarez has the fortune to resemble a chap many Sydney rock’n’rollers know: Ron Brown. And his playing is mighty fine - I suspect it was a bit of an influence in the early ‘80s, because if you’re wondering where all the melodies and tunes are in the music… they’re at his fingertips. Excellent stuff.

Stevenson sat there, looking relaxed and pounded and pounded, that all-over-the-place drumming style, so chaotic but so nuanced and particular. He was sweating buckets, his shirt was liquid within three songs.

Oh, dear. This isn’t the hardcore tough guy with tatts on his tatts and a beer belly to rival Santa’s, a leather jacket what Sid shat on and one of the Damned sicked up in and wot Will Shatter snorted LSD orf.

No. The first thing you notice is that, the guy looks and dresses like Dwayne Dibbley if he were an American, and that he is exactly like the album covers that feature him. 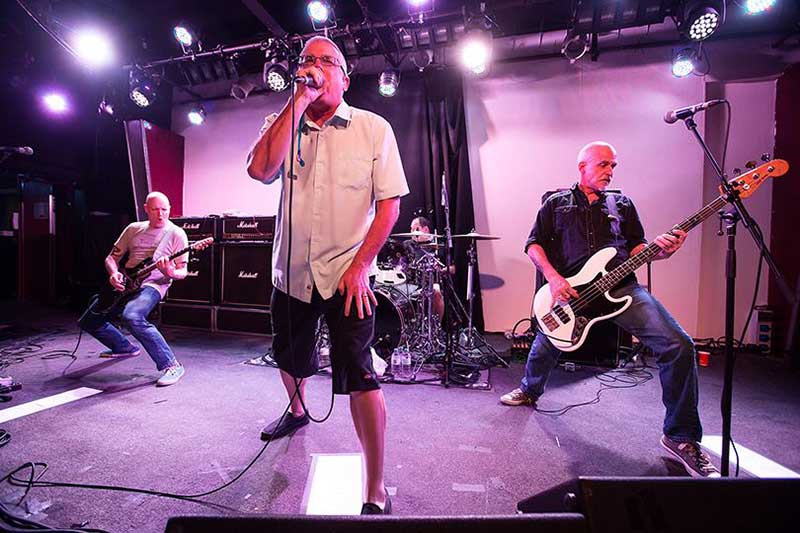 So, there’s Milo, in those big ol’ retiree shorts that Americans favour (and thanks to bloody Pearl Jam, so do many unfortunate male Australians) and a pale blue button-up shirt several sizes too big, to accommodate what he’s got under his shirt…

No, I’m not telling you yet. He’s wearing speccy specs with a big piece of black elastic to hold them on his head, those expensive rock’n’roll earplugs that drummers wear (Stevenson wears a pair, but he’s got a bloody excuse) and… Milo looks deformed, which, connected with his dancing like he’s got a touch of the Mark Mothersbaughs, makes him look utterly berko, nerdy and daft.

Deformed, I hear you cry? Deformed?

See, beneath the shirt, he’s got one of those trail-hiker backpack waterbag things, with a lewd blue tube poking out of his shirt like a sort of weird animal willy. And every now and then he gives the little blue willy a bit of a … suck.

First time he did it, I didn’t know where to look.

Then I got it.

Never mind these bottles of water, just here, suck on this when you need it.

And look like Lon Chaney with a crewcut and chemist teacher glasses.

Now, if you were in The Descendents touring Australia, would you trust the audience? Of course not.

So it took a little while for trust to develop. But with half the crowd (big for a Thursday in this little burg) singing along to almost every song, the band got more and more excited as the gig went on.

Milo in particular attempted to dance.

Do you know why Milo went to college? To get a degree in biochemistry.

There should be a law: Biochemists are forbidden from dancing.

The set came from all across their albums, the songs were funny and sharp and acerbic and made you want to dance and run around and throw pies and form a band.

Did I just say that?

The Descendents were fucking great. If you don’t go to see them, you’ll need to have a serious sicknote, otherwise no-one will ever take you seriously again.

Oh, the cops found the guy they think did the murder.

It wasn't me. Or Dimitri. Or Rob Stafford, or Ocky. 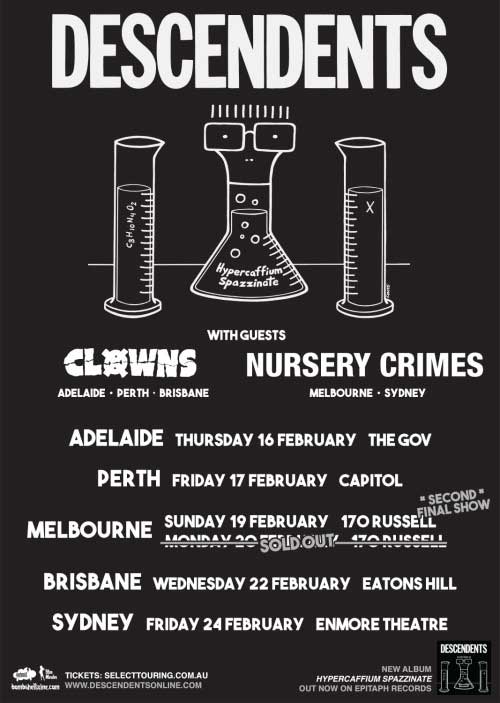