And I’ll even admit to being a little bitter too. I mean Phil Gabriel gets into the R&R Hall of Fame and not Lou [as a solo artist]? Gimme a break! In any case, Steve Wynn doing a Lou Reed set – that’s the type of tribute I needed. Someone had to do it, and who better? No-one, that’s who. When I first heard The Dream Syndicate they were really about the only band playing this kind of music around that time, the early '80s. Hard to believe, but true.

Bowery Electric is a superb venue. Our fine photog forgot her ticket – no problem at all. How rare is that!? We stood in the sweet spot and it was nicely air conditioned and my personal space was not compromised. How rare is THAT!?!? The live sound was utterly stellar. How rare…Ok, you get my drift.

The first band was The Nuclears. They had just started when we walked in. I was supposed to meet up with someone I had not met in person before so I told him “I’ll have a hat with the Blue Oyster Cult logo.” The Nuclears launched right into “Dominance and Submission,” the BOC classic where Radio Birdman got the name of their first album "Radios Appear." OK, when you walk in with a BOC hat and the band goes right into a BOC song, you’d have to be a total asshole to criticize them. Well, I may be one, but not because I did not like the Nuclears – I would totally go see them again. Really good group – power rock with two guitars and keyboards, and super clever choice of a cover tune.

Next up was Deniz Tek and the Bad Men aka The Golden Breed aka the Gudoy twins. They should’ve called this band The Renaissance Men, or maybe The Hyper-Achievers. All three of them have eye-popping resumes outside of Rock and Roll, as well as major skills within the Rock. 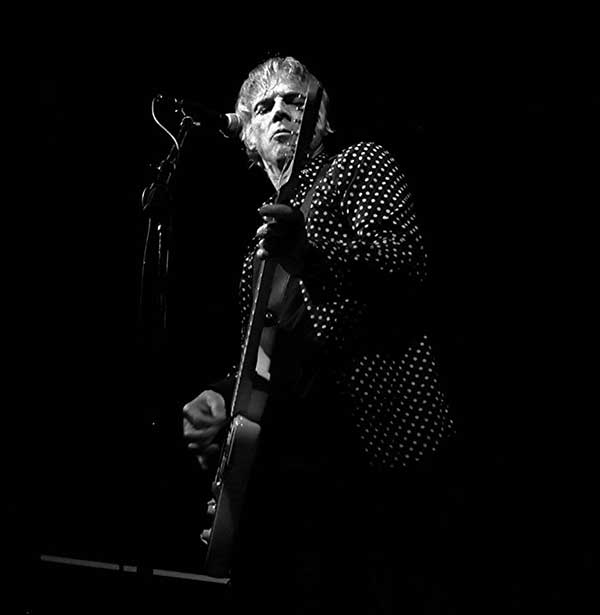 I don’t have to get into Deniz’s greatness with you – if you are reading this then you already know all about it. Hell, he wrote the song I-94! With his wide-ranging skills I wouldn’t be surprised to hear that besides writing the song, he paved the road as well. They opened up with a blistering version [is there any other kind?] of Fleetwood Mac’s “Oh Well.” Oh yeah! He then proceeded to deliver a set of songs from his killer recent disc "Detroit", as well as earlier solo faves like "Blood From A Stone" from the classic "Outside" album, and Steel Beach from his first solo LP "Take It To The Vertical", which featured some really nice moody/atmospheric guitar work.

Of course some Birdman classics got the treatment as well. A mid-set “Can Of Soup” upped the ante and Deniz seemed to kick into an even higher gear. When this guy goes into the crouch and hammers it out it’s what Michigan/Australian-style hard rock is all about. And it was great to get it in a context where there was not pandemonium all around me. The Gudoy brothers are both absolutely furious, excellent and propulsive musicians, and after all these years together [about 15 I am guessing] the three guys lock in with ease. 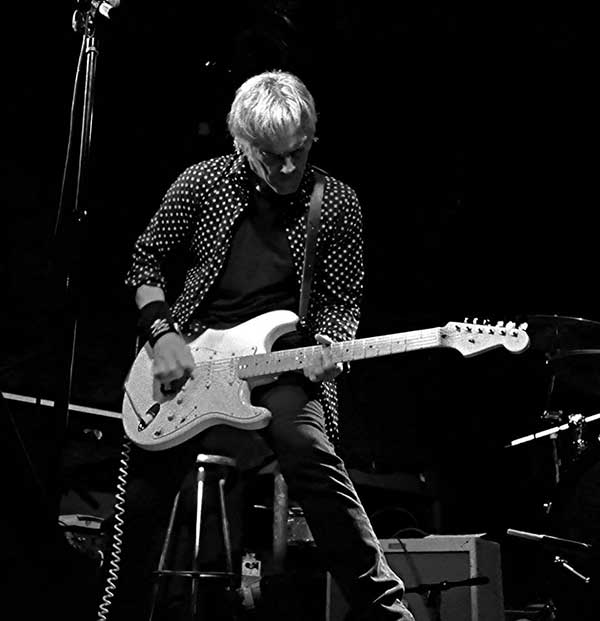 And, just an observation, but Steve Gudoy and Ron Keeley, Birdman’s drummer, have to be, stylistically, the two most different drummers I have ever seen. Keeley is all wrists, barely moves his arms. Gudoy is all arms – reaches back for each snare shot like he was going to throw a 100mph fastball.

Deniz likes to keep things fresh, does not micro-manage, and gives the people playing with him the room to make the parts their own. There is no better example of this than that he loves both those drummers. “Alone In The Endzone” was particularly fast and hard. The Birdman obscurity “Snake” was another nice surprise. The race to the finish line included a jawdropping “Maelstrom” where Deniz just tore up the fretboard and the set finisher “You’re Gonna Miss Me,” which I am not embarrassed to tell you I first heard by Radio Birdman. The encore of “Pipeline” and “Hand of Law” just flew by. 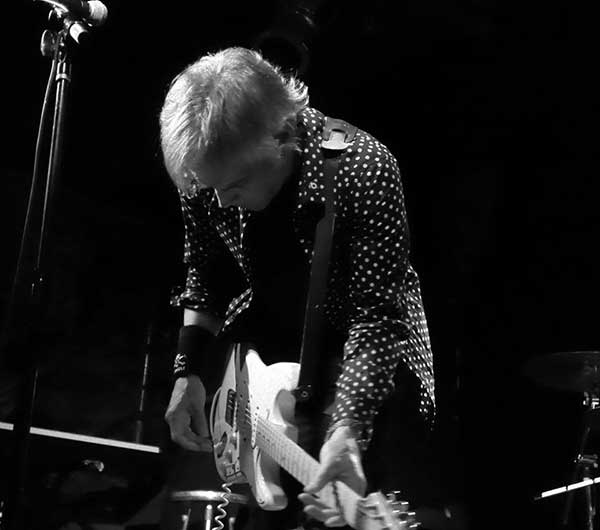 Normally, I’d be ready to go home after such a rocking show, but this was just getting going. Steve and his band The Miracle 3 [guitarist Jason Victor, bassman Dave DeCastro and drummer extraordinaire Linda Pitmon] have been together for about 13 years now. During the '90s Steve would alter his band every year, with a revolving cast of excellent musicians. He still does all kinds of different things, such as The Baseball Project and some strategic strikes with Dream Syndicate, but TM3 has been a stable outfit for a long time now. They gelled almost immediately, but at this point they are a seriously fearsome unit. The rhythm section is super-aggressive and Jason has really come into his own over the last couple of years. JV also plays with Ivan Julian and The Silos, which has undoubtedly helped him expand his chops.

So, the point is, that this had the potential to be mindblowing. And I am happy to report that it was. They hit the stage with four TM3 songs in a row and then did nine [9] Lou Reed classics [classics are all he has] in a row. The song they opened with, "Amphetamine", is usually the show closer – the type of song that really nothing can come after. Maybe I am reading too much into this, but that told me that they were about to pick up right where they normally leave off – a bold move for sure. The ferocity with which they tore through their own songs was pretty amazing. Of the four, there was one slow builder, “The Deep End,” and at that point I realized that the live sound was absolutely perfect. Jason’s slide guitar could not have sounded better!

After the opening salvo Steve said simply “We have something we are going to do.” The Lou set started with a beautiful “Sunday Morning” with its chiming guitars, a nice bridge to the intensity that was to come. Second was a pounding “I Can’t Stand It” with Linda pounding it out ala first Lou LP. While the Velvets version is obviously better than the Lou lp version, I’ll take the drums from the Lou LP version. I just always loved the drumming beat down on the solo LP. “Crazy Feeling” featured a wonderful vocal from Steve, and Jason really nailed the slide guitar parts.


Sax player Anthony Cekay joined the band for a brutal “Leave Me Alone” [whoever came up with that choice must be a genius!] which was done much more at "Take No Prisoners" pace [ignore the reviews – if you have never heard "Take No Prisoners" you need it – NOW] than the slower "Street Hassle" version. They also did some hilarious quoting from said live album. “You work for a year and get a B+ from some asshole in the Village Voice.” Coney Island Baby was next – replete with all the backing vocal parts and a straight vocal delivery from Steve. The phrasings throughout the show were excellent. There is no proper phrasing on Lou Reed songs, and Steve delivered vocals that totally enhanced without copying the album versions, or going too far off course. It was just right. They then exploded into “There She Goes Again,” which rocked nicely.

Lenny Kaye joined the band for the last three songs. He sang lead on a boogie-rock version of "Run Run Run" [“by way of ZZ Top” as he put it] where the chaos factor really elevated. [It should be noted that all the old guys like me and my friends were immediately jealous of Lenny’s hair.] There was a lot of brain damaging Lou style guitar playing throughout the show, but a couple of the tunes, like "Run x3" were really lights out. Then a lovely and inspiring "Loaded" style “Rock and Roll.” It’s one of the best rock songs ever written, sums up many of our religions, and I am just so glad they did it – with all those favorites to choose from, obviously they couldn’t do ‘em all. But you have to have “Rock and Roll” y’know?

And last, what else, Sister Ray. It was so intense with so much 3-ring guitar freakout ceiling collapse orgasmic release, that I am not nearly a good enough writer to describe it. It was epic [16+mins], savage, cruel, and very very fucking cathartic! With the guitar circus going on it would have been easy to miss the fact that the engine room stoked the fury with perfect consistency until there was nothing more to be done. Talk about holding a riff and a groove. It was so consistently intense and on the one it was pulverizing. And, just for the record, there was nothing sloppy about this show – no blown endings, no clams, no unsure vocals or missed lines – they nailed the whole damned thing.

All in all, a great night, one I and so many others needed. After it was over there was a lot of happy people there. Hugs all around! As I said at the top, someone had to do it and there was nobody better to take a shot at it. Steve Wynn “gets” Lou, always has, and he parlayed that into something that many of us craved – one more night of Lou Reed music played right. Thanks man.

[If I was a shameless plugger, I would mention that there is an excellent compilation album called "Let Me Turn You On!" on UK label Easy Action that includes rocking and exclusive tracks by both Steve and Deniz. And I’d show you the links to the reviews and samples and the one place you can buy the thing, which is dirt cheap and loaded with great/rare music and sexy graphics, but I would never do something like that, it would be in poor taste.]