“Love to Rule” kicks the ball into play and it’s a frenetic game from the opening whistle. “Tunnel of Love” is second song in and raises the energy with its irresistible push. Jeremy Oxley‘s wiry guitar is all over songs like “My Only Friend” and the incandescent “Love in The Box” and makes up for his lack of chatter. It’s the best I’ve heard him play in the handful of reunion shows I’ve seen.

With Jeremy not talking it’s left to Richard Burgman to enunciate. It might be odd to walk onto a stage and introduce your bandmates before a note’s been played but they’re the Sunnyboys, it’s their show, in front of very much their crowd, and rulebooks are for shredding.

The staging is first-class with strategic spots throwing sunflower installations into colourful relief. Did the Sydney Opera House show look this good? I didn’t go. The light show’s only visual competition tonight is the matching ensemble tops worn by the Oxley brothers. Only Big Bil Bilson on his towering drum riser has a better view. 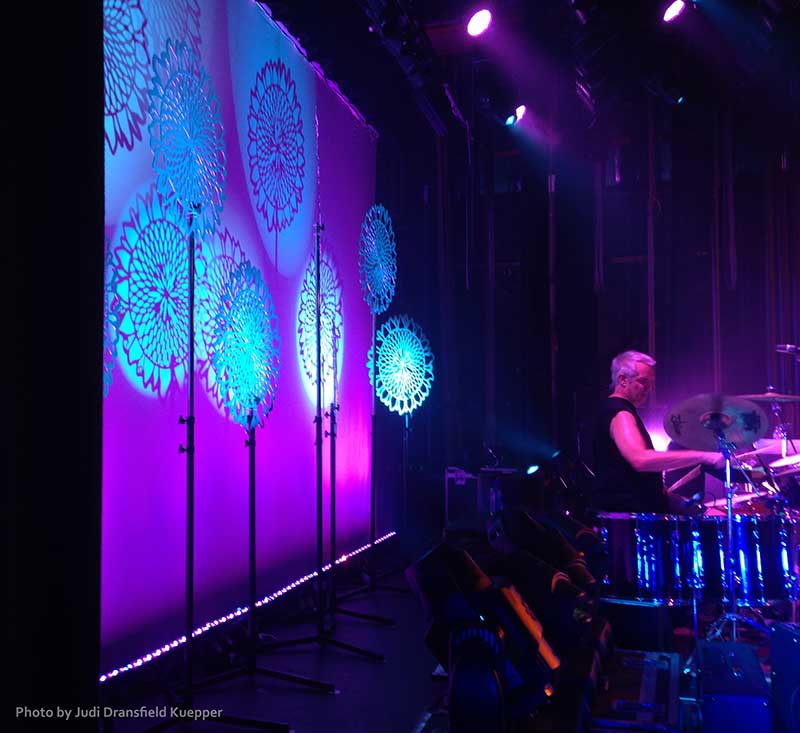 A fellow punter observed that you can approach this sort of gig as an exercise in nostalgia or you can judge it as it comes and entirely on its merits. There’s a bit of both going on. The dance floor of the Enmore is packed – and I mean jam-packed – to the point of being a seething mass of 55-year-olds that’s completely in tune with each song. They sing in all the right places. They are all Happy Men and Women.

The set was familiar. The band makes no allusions that this isn’t anything but a trip through the time tunnel so new material shouldn't be expected. There’s enough in the way it’s put over, and in the sprinkling of “new” oldies, to make that largely irrelevant. Jeremy and Richard defer to Peter who takes lead vocals on one of the fresh inclusions, “The Stooge”. “I’m Shakin’” and “Thrill” bring the set-proper to a sweaty conclusion before the five-song encore.

Where this goes from here is anyone’s guess. While new recordings don’t seem a priority, who knows? Neither was a full-blown national tour two years ago.

Opening band the New Christs fired (as the New Christs usually do) in a brutal 30-minute set. Their bracket, not unexpectedly, leant towards “Incarnations”, with notable oldies, “I Swear” and “Coming Apart”, appended. While the band originally throught they were going on a little later, they had about a thousand people watching after hitting the stage at 7.30.

I thought their sound was muddy, even in a brief stint up-front, but was later chided that the band had its usual guy mixing and any sludginess was down to my eventual vantage point.

I admit to not being a big Riptides fan but their 45-minute set was 42 minutes too long – and that’s only down to the fact that they played the infectious “77 Sunset Strip”. They might have always been a bit of a floating cast around Mark Callaghan, the one original member who’s still there, and comparisons to the headliner may be unfair, but their lightweight skanking pop seemed forced.

All that jumping up and down to rock-steady rhythms put me in mind of a Mental as Anything corporate gig I was force-fed a couple of lifetimes ago. The PA blew up but nobody in the audience noticed; the band played on to fulfil its contractual obligations - and not for one minute more. I’m not saying the Riptides were as bad as that or they were going through the motions, but they had the look, if not the smell, of accountancy about them.

Two final thoughts: If I was a former member brought on stage for the last few numbers, I wouldn’t be happy to just play the tambourine. How would you feel? “I used to play keyboards in The Riptides and all I got to do when I got up was to hit this silly thing.” Silly thing being the tambourine and not the current keyboardist.

Lastly, lots of people lapped them up. No, loved them. If you were one, you can tell me to get fucked in the comments section. Freedom of speech. That’s my gift to you.