The Meat Puppets at Fowlers Live in Adelaide

The Meat Puppets are an outfit I’ve been looking forward to seeing ever since I heard they were coming.

There are a few similarities with the last outfit I saw recently, The English Beat. Old band touring, only two original members, no set list. No encore because of curfew (Fowlers is right next to a huge block of student accommodation; you only rarely see the occasional student at Fowlers, and their sense of dislocation and disgust is visible).

But the gigs are very, very different, and not just because of the style of music.

First, the ‘pups (I never really liked the band’s name - it’s a horrible term for drug-addled prostitute - and I’d be surprised if the band themselves like it, but it’s what they came out with first and people recognise it). First, the four man crew have a lot of room onstage. And, because the main men, the Kirkwoods, still rule the stage, the continuity is powerful.

Quickly backtracking. When the US punk explosion started to emerge (on imported vinyl) in 83 or so, there were just so many bands we’d never heard of that only a handful could afford them all. It was a fucking landslide. You had to order a big box and hope for the best, your mates would then order the bands they liked the most. The wave was dying down by mid-85, and some of the best bands had vanished. Ok, most punkers now know of Black Flag, Fear, the Circle Jerks, the Dicks, MDC, Flipper, while Really Red, Big Boys and Big Black are a bit forgotten.

Back then I recall a party at the end of 84, trying to explain to drunken jerks in their uniform black leather jackets with shit english bands written on the back in white paint (Chron Gen, anyone? Exploited? Vice Squad? do me a favour. I’d heard these bands and they were so damn dull. Even the lefty’s favourite aggro hippies, Crass, bored me rigid) that the current wave of American punk was brilliant.

American? Fucking sell-outs (etc etc) was the response. Adelaide, once ferociously ahead musically, was now well and truly behind. Only one band bounded forth from the energy of the American bands, Ribcage Wrestlers, and they vanished after about four gigs here and a few interstate. So unlike the English Beat, who had numerous hits and a big profile, the Meat Puppets never really ‘crossed over’. When people say they’ve never heard of the ‘Pups, I direct them to the Nirvana MTV thing. Remember that song?

What..? But that’s one of Nirvana’s best songs! (etc, draws veil over proceedings)

The ‘Pup’s first LP was a grinding sound. They would’ve been hellish to hear live.

Then, in ’84, they simply … altered. Started playing what they really wanted to play. Discovered their ideal platform. After several years, and a bit of mainstream exposure thanks to a kindly, courageous and mischievous Kurt Cobain, the ‘pups more or less ground to a halt a few years later.

After a few tries at starting again under different names, the Kirkwoods reclaimed their famous name and, with original drummer Bostrom abstaining, the Meat Puppets began touring and recording again. Shandon Sahm (yes, Doug Sahm’s son) has been playing with them now for four years and Curt Kirkwood’s 30-year-old son Elmo is handling the rhythm guitar.

Quickly - are they any good?

My fucking oath they are.

First, they’ve still got that reason to play they always had. Second, they’re much tighter and better than they’ve ever been. Almost every song jams off somewhere before slipping back. There’s no set list but, the English Beat already knew the set off by heart, the ‘Pups seem to be simply following Curt’s lead. And he makes the set up as he goes. Keep up, boys. It’s amazing to watch.

The band walked out without fanfare, almost unnoticed. The Kirkwood’s clothes look clean, but… old. Friendly. Familiar clothes. They don’t look important, or that they consider themselves important. Sahm had been wandering about in the crowd (wearing an excellent Devo shirt, just the name, nothing else needs be said) before the gig. Cris had been having a puff outside while the punters rocked up.

Basically the band look like the blokes next door. 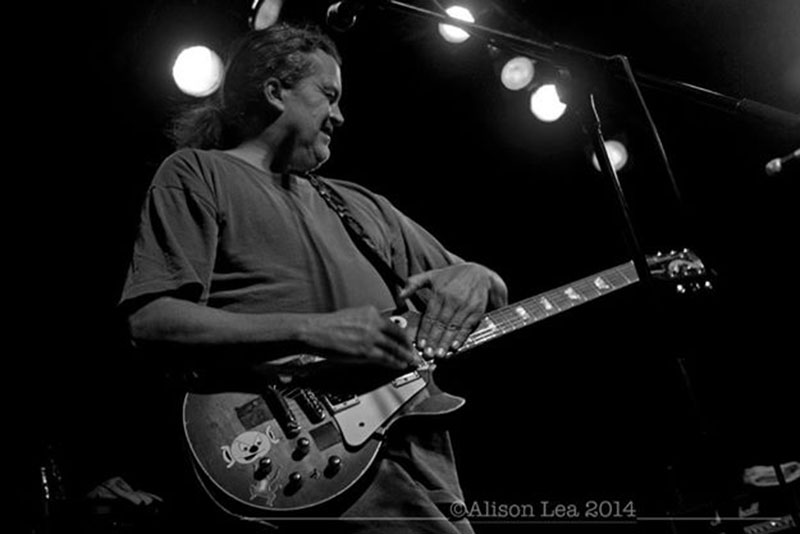 But not the way they handle themselves onstage. They don’t swagger, but unlike most bands, they own the stage. It’s their second home, if not their first. They don’t perform, mug or prance about like prima donnas. They just present their music. Complex, simple, singalong, dancealong music.

You really don’t know who to concentrate on. Sahm, stripped to the waist, and hammering with delighted attention - he loves this - or Elmo, all hair and slightly-repulsively-aqua fender thingummy - his style is bloody good. He doesn’t just know the songs, he’s inside them, and he has a ball onstage, big happy smiles all over the place, and if he were the front man you wouldn’t be able to take your eyes off him.

Cris Kirkwood wears an old white tshirt under an army surplus jacket and jeans and a nice royal blue fender bass. He’s into it, offhand and powerful, Sahm keeping up or setting the pace - yeah, it looked like that varied - and drives the band forward. They’re all completely involved with the music, the spaces it makes, the silences. The crowd love it.

Curt Kirkwood wears an old, slightly faded dark blue tshirt and what looks like a plank of painted wood left in someone’s leaky shed for eight years. Rodents have worshipped this thing. But they’re not dressing down. This is what they are.

Actually, let me explain. I have never seen a filthier guitar in nearly forty years of going to gigs. Curt’s … plywood … looks like the pickups are either coated in crap or actually rusty. But… it plays like the clearest bell you ever heard on a clean fresh spring morning. Reminds me of the story I once heard about Ry Cooder, how a musician held Ry’s guitar, with those famously greasy strings, and couldn’t get a single note out of it … but Ry grinned, picked it up and made it sing. For all I know it might be bullshit, but it’s a great story, and if ain’t true, it should be.

Curt’s fingers don’t fondle the strings, he’s … handling the music. His fingers move with loving tenderness, a slight smile, then they dance about on the old fretboard. He holds the guitar in such a strange, familiar way, sometimes like an old lover, other times like a club. They play within their structures in such a way that you recognise the song, but love what they do with it. Just like one of those superb jazz musicians most people seem to know of but never listen to. I’m thinking Monk, Bird, Hawkins.

Yes, there were some oldies. And some new songs. None from one of my favourite lps, but do you think I care? I was able to ask Elmo a couple of questions afterwards;

‘Not sure how many we can do as a band... I was never really taught any of the songs and before my first tour with the band we only practiced once haha.. Last year we learned the entirety of Rat Farm so that added a few more to the arsenal.. We also know a shit load of country songs and old covers like that.. But it would be hard to say just how many we could pull off at the drop of a hat…’

In spite all the media attention around the world over the years, and bums who come looking for r’n’r mayhem, the ‘pups are what they are. Sure, I expect they’d be kicked out of the Hilton or prevented from entering the Senate. But so would you and so would I, because we don’t want to belong there. Here’s a band doing the impossible in the face of a fame they didn’t really want. Brilliant music, astonishing technique from Curt (hint for next Adelaide guitar festival: Meat Puppets), songs that rip you up and have you whistling the tune.

More to the point, their music still comes from that dark, wistful, damaged innocent core they steep every record in. There’s grace, eloquence, love and humour in every song, sometimes a maelstrom of savagery, and the emotions pouring from both the band and the crowd is quite incredible. Like FB says, it’s complicated. Several of us comment afterwards that our shoulders, heads and faces are aching from smiling so much, laughing with joy and amazement. Pain well worth paying for.

Back in '85, I remember mentioning how I couldn’t get "Up on the Sun" out of my head, to hear the amazed response, ‘There’s a third lp? I can’t get over the second!’ And the ‘pups have kept making the discs. The new release is Rat Farm, and the website has a few great deals, including posters and T’s. Much of their back catalogue is available there, and if you don’t own them, this is a serious, possibly criminal omission on your part.

This is where you need to go next, and this is what you need to do: http://www.themeatpuppets.com/shop/

By the way, The English Beat get three bottles, tops; the ‘Pups, six. Well over and above expectations, and frankly, you should be buying big boxes of ‘Pups CDs because they make excellent presents.

The photographs which accompany this article were taken by Alison Lea, famous for her shot of Nick Cave (half-naked and mucky with paint) on the back of the Nick the Stripper 12" a couple of years ago. Pester her here for prints of these and other photos. 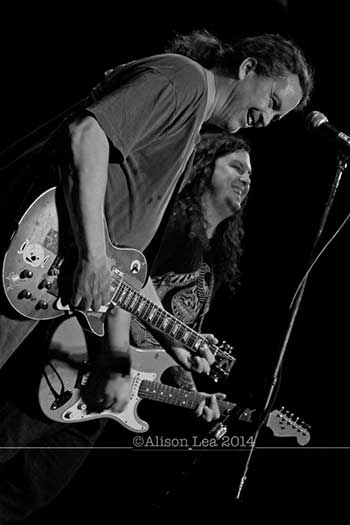