Sydney almost missed out. Irony, really. With the Interwebs belatedly buzzing about inner-city licensed venue trading restrictions brought in by the State Government TWO YEARS AGO and that have had almost zero impact on live music, the early mail was that The Mummies were giving the Harbour City a miss. This looked like a reflection on our city’s long-standing ambivalence to supporting live music more than anything else. Wheels were set in motion, however, and deals were done. Sydney was included. So it had better play nice and turn up.

It did. The gig (on a Thursday night) was sold out the day before. Not a shock as the venue, Hermann’s Bar in the grounds of Sydney University, has a modest capacity that was stretched to its limit. The original plan was to put on the show in a much bigger room, the Uni’s well-appointed Manning Bar, but a prior booking meant it was Hermann’s or bust.

Avoiding reviewing races in which I have a horse is a rule-of-thumb around these parts. I don’t get out as much these days so I figure it’s OK…as long as I declare an interest. Besides, the Psychotic Turnbuckles are a bunch of no-good bums who should never show their faces outside the air-conditioned confines of The Clam Club in Pismo Beach, especially on a school night. They should stay the fuck out of Sydney and leave our lap-dancing clubs alone.

Running this band’s affairs is a nightmare because you have to deal with its members’ personal managers - I’m looking at you Chester Chitworth, and your “client” Jesse The Intruder - and the constant threat that one of them is going to be refused a visa.

So it came to pass on a humid afternoon that The Celebrity Roadie and I find ourselves in Hermann’s Bar, moving small but chunky pieces of amplification equipment around in semi-darkness.

Hermann’s is a compact but well-appointed room. The PA sounds great. The staff aren’t arseholes. There’s an ATM. There are your basic requirements, right there. There’s an outdoor beer garden for chilling or smokers. The bar only stocks Lion Nathan beers but that’s my problem and possibly not yours.

Tonight’s crowd is a mix of the old, the new, the good, the bad and of course the ugly. Ageing veterans (now there’s a tautology) of the Sydney underground music scene mix it with fresher faces, possibly brought in by opening act Los Tones, who manage to go MIA a few minutes before stage-time. They’re found in the nick of time.

Los Tones are a four-piece who play a distinctive strain of twangy garage-surf rock with nary a low-slung guitar between them. I only catch bits and pieces but it’s not bad, if a little samey at times. The kids seem to like it and that’s the main thing. Your local warehouse might be the place to see them. These places are the new pubs. 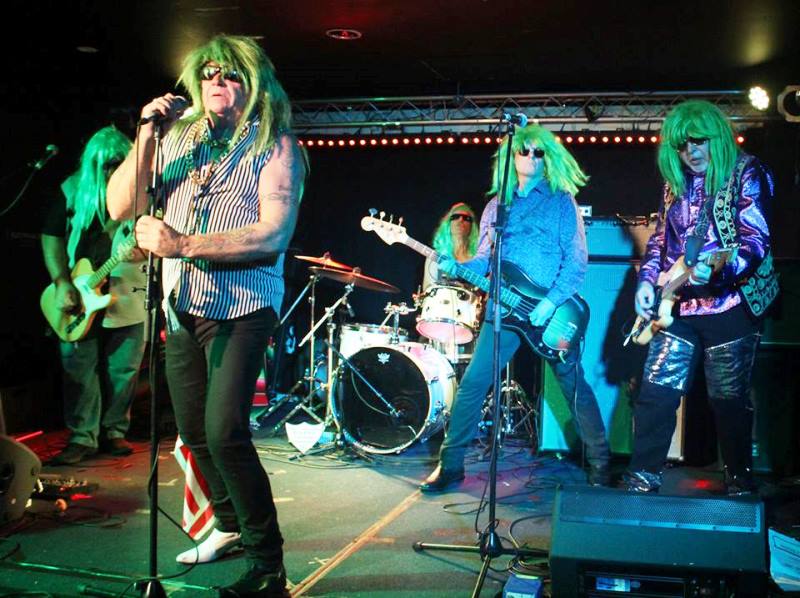 The Psychotic Turnbuckles burst onto the stage with two new members in tow. Guitarist El Siccodelico has been arrested by Border Patrol for smuggling an illegal substance (to wit, Turnbuckle Tonic) into Australia, while there are conflicting stories about drummer Karl Domah. He’s either suffered a non- life threatening hunting accident involving a jealous boyfriend or he’s been suspended. Tonight, they’re replaced respectively by a formidable presence from south of the US border, El Grande, and Buddy “Bam Bam” Balam, aka the Brooklyn Bruiser.

Tonight’s Turnbuckles set is a noisier and more fullsome affair than their last one-guitar outing in Sydney last December. The Grand Wizard is in withering form on lead stun guitar. Thee Psychedelic Unknown’s bass is in lock-groove with “Bam Bam” Balam’s impeccable ‘60s feels. Chaos is always casting its shadow but that’s how these guys roll - and a big part of the fun. 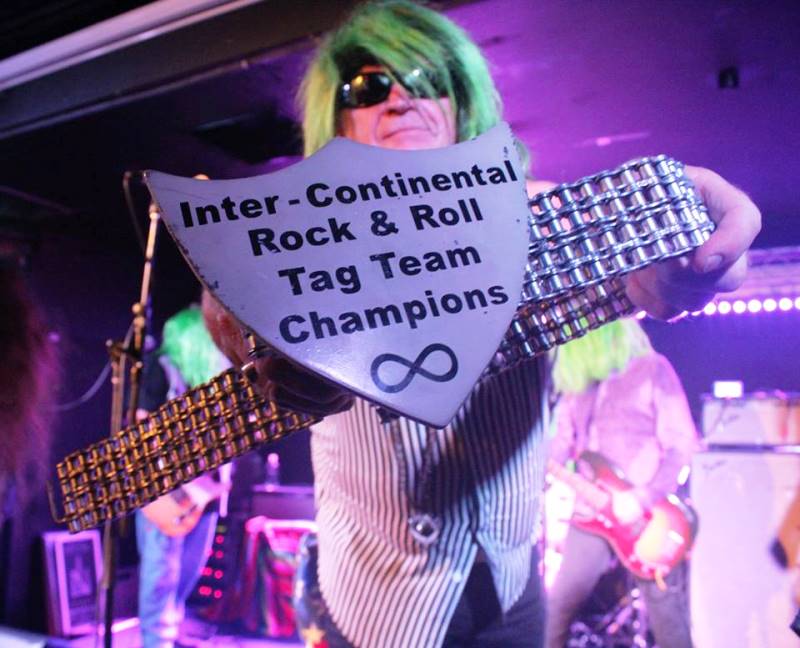 A word on our headliners: For garage Rock Royalty, they sure are normal. Unmasked, they and a couple of their spouses spend much of the evening mixing with punters or staffing a modestly-equipped merch table. They arrive and leave in a mini-bus, have sandwiches for dinner and, according to promoter Tiffany Barfly, their biggest post-gig priorities on Friday are seeing the Sydney Harbour Bridge and going record shopping.

One of them was even heard to say to a Turnbuckle: "Ivy told us to check you guys out".

But back at Hermann‘s it’s Showtime. The curtains are drawn closed and the band, now mummified, is in place. Two of them are doing stretches, the reason for which will be apparent soon enough. Sitting behind the most basic of kits (one rack tom, one floor tom, kick and not much else), Russell Quan gets into up a splashy hi-hat pattern. The Celebrity Roadie and I take up our appointed places at each side of the stage.

“Budget Rock all the way.”

The announcer does his thing. We do ours.

The front 10 rows of the room explode. 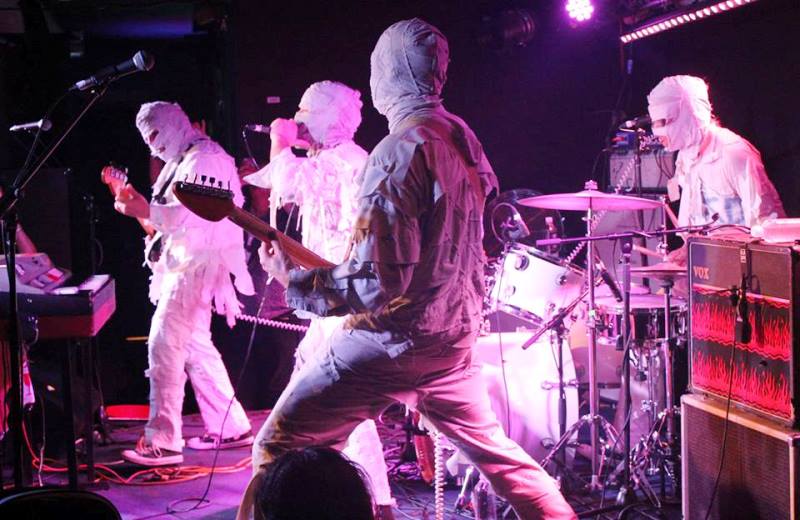 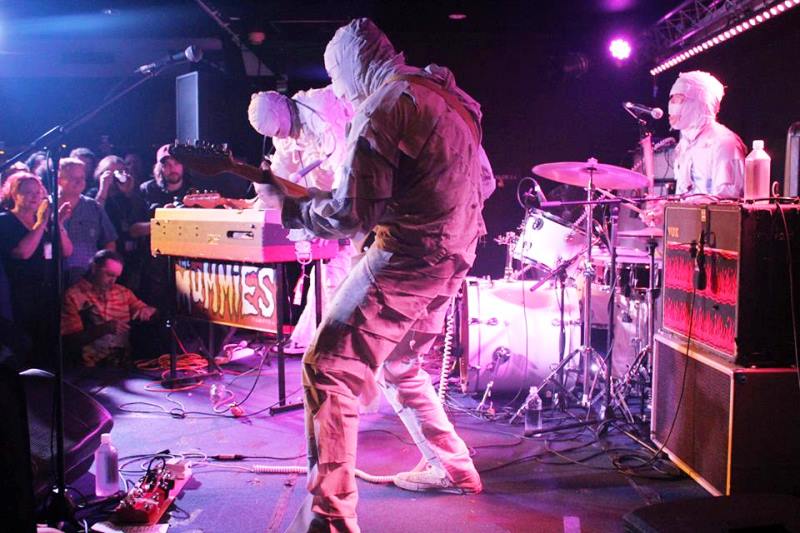 “Come On Up” is the first song. The punters go fucking nuts. The Mummies jump, writhe and rampage all over the small stage. They’re tight-loose and nothing like shambolic. Playing this sort of music is one thing but doing it with the physicality that they bring is entirely another.

How any of them can see what they’re doing through those bandages is anyone’s guess.

Trent Ruane’s rented Farfisa is the centrepiece and vital to the sound. It’s already showing signs of wear and tear (one key adrift) as he drapes himself on top of it, under it and over it, pounding out the organ lines that flesh out the band’s sound.

What songs they played was almost immaterial, although longstanding fan Rodney Todd rightly lamented the absence of “Stronger Than Dirt”.  They are The Mummies and they could have played the phone book for all that most of us cared. Melbourne had been treated to a cover of the Easybeats’ ”Women”; Sydney got covers of “Shot Down” and Devo‘s “Uncontrollable Urge”.

This was an hour of Budget Rock that left no-one spitting any chips.

Verdict? They were fucking great. The night was too. But let’s The Mummies have the last word by recalling this message on their website:

The Mummies were a stupid band. This is their stupid Website.
You cared about them enough to get this far.
Now you are stupid too.
That's the Mummies' curse.

You should feel stupid if you missed them.

The Mummies on the Web