By the time The '80s got going the bands which, to me, seemed to be creatively adventurous, began to fade away in favour of crops of bands which used generic styles of rock which ... I must be honest, they bored the shit out of me. It has been said of me that in, say, 1985 or 1986, I would be more prone to put on the new Crime and the City Solution record than the new burst of sunshine from the Sunnyboys (who still make me react like you might to a fingernail down a blackboard), and I must accept that that is true.

There were exceptions to my prejudice about stylisation: Permanent Damage were a brilliant band to experience live because they created a whirlpool within a very structured genre and dragged you into them, but I don't listen to them at home. Because what I thirsted for back then, was adventure ... so I missed out on a lot of rock'n'roll bands which today, many friends love to bits and regard through a nostalgic mist. I won't name the bands - as I've met some of their members and rather like them as people. As most of you know, go to a gig and you end up talking music with the band, because they're playing music for the same reason you're there as well - the love.

And that's another thing, you know. One dreadful truth we encounter when we start leaving the teenage bedroom and venture forth into the dim, murky (often sticky, and, in the case of The Public Bar in Melbourne, splashy) world of rock'n'roll, that some brilliant bands are composed of people one can only describe as tossers, while other bands are composed of sweet and lovely people but the band is so beyond woeful they're utterly appalling and you don't dare review them because you'll make them cry.

These days, after I started going into the pubs again after about 15 years' absence (in 2005), I find that (1.) I still don't like a lot of those Eighties bands that everyone else inexplicably loves, but (2.) I am rather impressed by the fact that so many current bands are out there, doing their best to make original and interesting music. All three bands displaying their wares tonight have been digging into the 1970s and emerging with their own takes on what, looking back, was an extraordinarily diverse decade.

If only the Braithwaites and the Sayers could have been beheaded in 1972...

Sorry, got off topic there. Hope you didn't notice. For once I arrived early enough to catch the support acts; Electric Badger were bloody good. Actual songs, with variety and flair, some good original playing. Tuff bass dude, too. Great mixture of styles, some songs somewhere in metal terrain, others in a sort've 1972 rock of the pops groove. I'll be seeing them again. Listen to them here.

Lead Worm were damned impressive. They're young, talented, keen to get your attention and get inside your skulls. Sort of a croadelaidess between Killing Joke and Nirvana, but without the pop shit. That's not entirely accurate, but it doesn't matter. One reason they particularly impressed tonight was they played without their bass player - so they synced a recording of him and went from there. Any band who brings their own dry ice machine, flashing lights,  projection box (complete with a set's worth of their own videos) will instant gets your attention, but if the band or songs ain't up to snuff that could backfire.

Not with Lead Worm. Big bastard twin guitars, humming, throbbing bass and a killer drummer - one of three tonight. Loved the way everything knitted together; another local band I'll have to see. I was damned impressed.  Listen to them here and here. 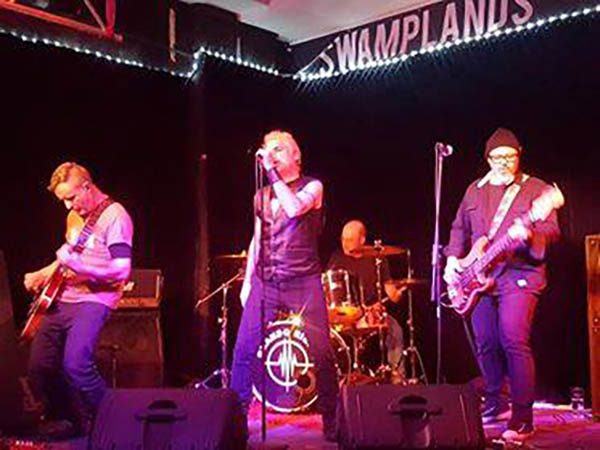 Brando Rising features two escaped Adelaideans, Rip and Kelly, so by now one might almost be tempted to say that Adelaide should be on your list of jolly fun places to visit, but hey. Come for the wineries, the murder tours (there should be a company doing these), and local bands. Can't think of owt else.

Now then ... Ripley, well. His natural state is performing on a stage; so much so that, in real life one suspects his friends sneak up behind him and shout, out of the blue, 'Look, Rip, a stage!' and snigger meanly as he bounds off. If you're one of those unlucky few bumbags who haven't discovered the delight of watching a man with more front than Harrods, the onstage manner of Iggy Pop with equal dollops Kenneth Williams and Lon Chaney lurch, pose, pontificate, pout, point, twirl, drool, gurn, and gesture grope himself like a mediterranean male off their tits on grappa, then I'm afraid you simply have not lived.

Ripley Hood is one of those natural show-offs who has the kind of stage presence you can only gawp at, marvelling that the man is not only good-looking (his flight the previous night had been cancelled, possibly because the aircrew just couldn't cope with his good looks) but also has one of those big, effortless-sounding voices which goes up, down and all about like Zebedee off TV show "Magic Roundabout" on his spring.

The band themselves are better, tighter, looser and more flexible than the last time I saw them; the songs have morphed, some have been given the flick. They did do the EP, of course, but seeing them eighteen months on is quite the revelation. Steve is a cracking drummer, locked-in with Pete on bass. Pete himself is that rare bass player, he doesn't just keep the beat and keep to himself, his playing is remarkably complex and adds an extra depth and dimension to the songs.

Like Rip, Kelly Hewson should be inducted into the r'n'r hall of fame just because. Kelly is a damn fine guitarist, with a great big bursting yowling sound, great control and, during the last songs, rather wonderful bunny hops. Peculiarly, neither Rip nor Kelly have lead singer syndrome or lead guitarist syndrome.

Covers, there were three; the Damned's "Channel 7, Plan 9", Iggy and the Stooges' "Penetration" and Stiv Bators and Brian James' "Li'l Boys Play With Dolls" ... and a Bauhaus number, "Lagartija Nick".

What you need to know is ... the covers were played well, but really, it's Brando Rising's originals which really shone the most.

The crowd were raucous, good-humoured and the bands bounced off them well. There are a lot of reasons to go out to see bands, always have been and always will be. All these bands need is you.