What’s he look like? Well, he’s a bit shy, but kind of like a cross-between a thug and an eggheady boffin type. Cut-off T-shirt but no tatts, for example. To complete the picture, he needs a stoop and thick glasses. So the rollies and Vodka will have to do.

Chris really is the juicy, frantic, artistic heart beating within the confines of Fear and Loathing. If he could clone himself …

“I’ve considered this many times, if I could I’d have four or five clones to play in the same band, that would be great. But we’d all end up arguing about who would be the drummer, and we’d split up and each form different bands…

“I’d need minions to do the drudge work, typical mad scientist, I’d have minions everywhere and they’d get everything wrong so I’d end up doing it anyway,’ he explains as he pulls the Stoli out of the freezer. ‘It’s a bit early I suppose but I’m doing maintenance work on my files today, so …”

Oh, dear. I hope he’ll be able to find everything in the morning.

The reason I asked was because I know Chris. He’s a very exciting man to be around. He gets these ideas, and he … follows them. In fact it’s an effort not to. He once had an idea for a song, then devised an entire outfit for the band members … and then stopped, because he knew he’d have to write a set, find the people, do the recording and mastering himself and …he has other things more pressing to do. 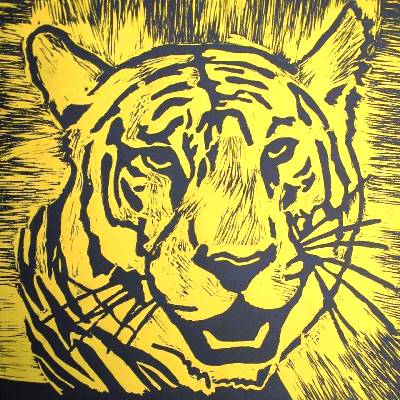 Chris is exactly like an artist, juggling time between commissions and his ‘real’ work. He’s working on a solo project, just him and an acoustic guitar playing sad cowboy songs. But I’ll tell you about that another day. Let’s go back…

Chris, how many bands have you been in over the years..?

Chris’ workroom, AKA Spudland Studio, is neat and tidy, but in that ‘clumps of stuff bundled into corners’ look which some houses develop when the landlord’s due for an inspection. I can see an ‘Aged’ sign, a Tubeway Army lp at the head of a group of about 40 LPs, a copy of MiSex’s horrid Computer Games 7” at the head of a similar group of singles.

Three broken amps hide in shame alongside racks of CDs and assorted instruments including bongos, an African drum… and a fan. There’s an upright piano accordion tidily tucked away. A native spear and a PNG wooden mask, a home-thrown witchy teapot and assorted piles of … stuff … hint at the weirdness in Chris’ soul. But nothing more foul than …

Chris, is that a Farfisa?

“Yes. I’ve wanted one since I was a teenager.”

Took you a while.

“I was helping someone clean out a shed and we found it out the back covered in dust, and I’ve restored it to health …”

A large plastic eyeball with a top hat er, eyes the proceedings …

How did the Residents influence you, Chris? I mean, I know everyone expects you to be a huge Stooges and Pistols fan, but…

“Well, it was one of those weird things. I didn’t know who they were at first… I heard them on the local community radio, 5MMM, when I was at high school. I’d tape stuff off the radio, but the MMM announcers were a bit slack, so I had these great songs by the Residents and Snakefinger on a cassette, the wackiest stuff I’d ever heard, I loved it but I had no idea who they were … this demented weird cartoon music, which has always appealed to me.

“I was at a friend’s place watching Nightmoves in about 1980 and they showed four of the one-minute movies from the ‘Commercial’ album, and I recognised them, pointing at the screen excitedly and going, ‘That’s who they are! I know who they are!’. I went out the next day and got the album and inflicted it on all my friends …”

At the time Chris was living with a large number of like-minded creative characters at a kind of punk headquarters, 205 O’Connell Street. A few initially moved in, and their musical tastes horrified the hippies, who moved out, and everyone else brought their friends in.

It wasn’t long before ‘205’ as it was known, was spreading all sorts of musical virii around the city. There were a few similar share houses nearby, such as the rooms above The Chicken Inn, North Adelaide’s rather glutinous answer to the famous southern fried chicken chain.

But don’t get the idea that Chris is some sort of Residents nerd. “Even with the punk stuff, the closest I’d get to with my guitar would be Poison Ivy, The Dead Kennedys and Fear, that was the kind of guitar sound I could get closest to, East Bay Ray had that sort of surf sound…”

This is one of the members of Tardis Retardis, a kind of DEVO-inspired outfit which should have gotten further but … hey, it’s Adelaide, so they didn’t. I mean, with the Captain Spud moniker, you know he's a Devo-tional kinda guy.

“Madness and Devo were my big keyboard influences as a teenager … I don’t really listen to them now, I suppose, or the Residents. Either I’m listening to the stuff I’m producing or I’m listening to … well, look…”

I peer at a list of stuff on his hard drive and gulp. From technometal like Alec Empire or the Slugfuckers to Spanish Renaissance, to Twin Peaks, Dr Who to Lee Hazlewood, Killdozer and er… steamboat calliope…I’m beginning to see just what Chris brings to Fear and Loathing, and how much that band are like a specific creative arena for him. He has other arenas. 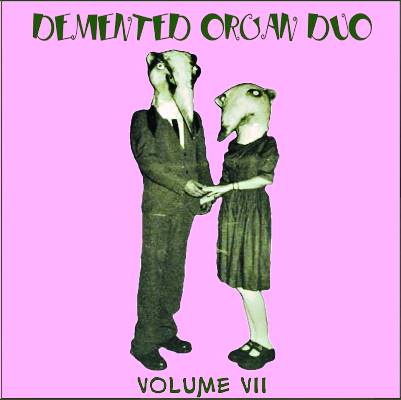 Demented Organ Duo are Chris and the enigmatic Ms Kakl. It’s worth reading out what they do on this eight-minute, five track … animal. Ms Kakl does vocals, xylophone, slide whistle, drum, frog bells … and pixie bells …

The “Volume VII” (recorded at Temple Studio) is the noisiest all-acoustic melodic racket you’ve ever heard.  It’s somewhere between a series of short soundtracks and bonkers dance music. You’re not sure of the film you saw it in, but you remember it. Kinda.

And it’s all through a 16-track analogue mixing desk, natch, including Chris’ eerie Peter Lorre vocal. It’s great fun, enigmatic and addictive. The inner sleeve doesn’t have “Please set your CD player to ‘loop’ for maximum enjoyment” for nothing.

There are two cover versions, but I doubt you’ll be familiar with their names … although you’ll recognise them, kinda. “Where Could My Kitty Kat Be?” is by Parry Gripp (no, not until I’d been played the song, no) and the other is “Meowmix”  … my favourite is “Gunfight at the San Remo Song Festival” and let me tell you these CDs are worth the price of admission…

“Volume VII” and “Tiger Squad” are, as far as I am concerned, five bottle releases and worthy of inclusion in your extensive collection. In fact, if you’ve read this far, you should be somewhat ashamed if you don’t have them. Chris Spud embodies the true punk spirit, and he is the epitome of the creative imperative; on top of that, his work is nothing short of extraordinary.

All around me are further signs of Chris’ crimes, a metal kid’s xylophone, bamboo baby xylophone, a giant recorder, a Roland Juno-60, mandolin, the 6ts Czechoslovakian melodica… Assorted guitars and a bass cower in the corner.

Both Demented Organ Duo and Captain Spud are the antithesis of FAL’s skronk (FAL being Fear and Loathing, Chris’ more normal band … although FAL aren’t really that normal.

How would you describe your compositions, Chris?

“I call it Musical Decoupage. There’s a lot of loops and cut and paste, a lot of editing, with Captain Spud it’s all manipulated sample loops …”

This sounds a little odd until you experience the joy and wonder that is Captain Spud. “It’s all done on Nanna,” Chris explains helpfully, “That’s why it sounds like its 40-year- old.”

“Oh, I call my computer Nanna. ‘Oh, me old bones, I’m not as fast as I used to be, I’ll get there’,” he quavers in a tremulous little old lady voice.

Is this why you produce hybrid ‘70s disco music on your poor old laptop?

Any last thoughts on these CDs, Chris..?

“I love it how this stuff gets stuck in your head.”

Clearly it’s not his fault, but yours for picking this gingerbread fancy up in the first place.

Buy the CDs now via Chris Spud on Facebook. They’re probably only $5 each plus postage. You’ll love them. I wish I could share Chris with the world, but this will have to do. Hell, hire the man to offend your the despised guests at your next function. Christmas is coming.

If you’re retiring, hire FAL to deafen your revolting work colleagues and make them cry. If you have to turn up again at work next year, hire Captain Spud to ease the revolting ones into troubled dreams where cats talk to birds and birds enter the cat’s mouths willingly.