As an ice-breaker, he's quick to throw in the fact that his mother-in-law is Norwegian and her daughter (his wife) was born in Australia.

The Pretty Things are his first musical love but this week's priority is a Thursday night gig at The 100 Club in London with Stephen Dale Petit and his High Voltage Band, Taylor is cast in what might seem the unlikely role of bass player.

"Classic Blues magazine described Stephen's "At High Voltage" album as being like Live at Leeds so that's quite a complement," Dick says. "Stephen is quite a skilful player and it's great fun getting up there with him."

It's not often that you truly are in the presence of rock and roll greatness but that's what Australasian fans of the Pretty Things can expect when the legendary UK band tours these shores in December.

Essentially original members, singer Phil May and Taylor, they were (are) the archetypal British R & B band. Snarling classics like "Rosalyn", "Get The Picture", "Midnight to Six Man" and "LSD" are among the most primal rock and roll songs committed to tape. 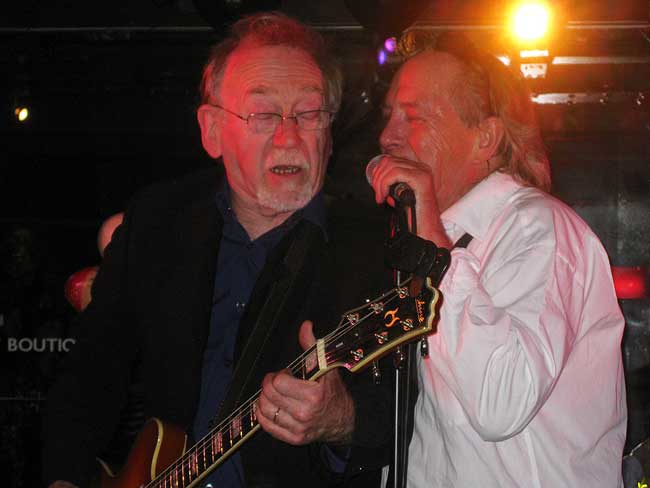 They went on to produce a stone classic of the psychedelic era in "SF Sorrow". The Taylor-less "Parachute" that followed in 1970 was rated Rolling Stone's Album of the year. Their career continued intermittently, and with mixed chart success, before revivals in the '80s and '90s.

As for Dick Taylor's prior record - he was an original Rolling Stone, playing bass with Mick, Keith and Brian in 1962 when they were Little Boy Blue and The Blue Boys on the nascent London blues club scene.

He quit after being accepted into London Central School of Art where he met future Pretty Things singer Phil May. Apart from a nine-year absence from the ranks during which he produced bands like Hakwkind, Taylor has been an integral element since.

December is the Pretty Things' inaugural foray to Australia and their first appearance in New Zealand since being banned from the country after a two-week run (with Sandie Shaw!) in 1965. Their lock-out was due in no small part to the antics of then-drummer Vivian Prince, who set the style for rock and roll excess and actually pre-empted the lunacy of Keith Moon.

A trail of demolitions and on-stage pyromania and a plane trip where he was deemed too pissed to be a passenger led to him being sacked at tour's end but he's still alive, growing oranges and breeding Alsatian dogs in Portugal.

A modern line-up of the Pretty Things paid tribute to their long-gone drummer in song on their 1999 "Rage…Before Beauty" album.

"i actually had a sensible phone conversation with Vivian a couple of Christmases ago," Dick says. "Thankfully, he's cut down on his drinking because it's amazing that he's still alive.

"I do have some good memories of that New Zealand tour. The people were enthusiastic and there were some great gigs, especially one of the bigger ones in Auckland."

That tour was viewed as a career mistake for the Pretty Things. Signed to a Motown subsidiary and reeling from the sonic mis-step of their "Emotions" album, they chose to go to the Land of the Long White Cloud over joining the British Invasion of the US.

"People ask me if I regret that or leaving the Rolling Stones," says Taylor. "I don't regret anything because what I've done with the Pretty Things is what's brought me here today and I'm very happy.

"It's given me the chance to go to Australia and New Zealand. It's made us a cult band in the United States."

The journey has given him some unique insights. One lesser-known side trip was as producer for fringe punk misfit Auntie Pus, who was a neighbour and mate of The Damned. In 1981, Taylor played guitar in Auntie Pus and the Men From Uncle.

"Punk did remind me of the early days of the Pretty Things, with people taking up the chance to play music if sometimes they weren't very skilled," he reflects. "I quite liked the idea of taking on the big record labels."

The Pretty Things were always about energy and Taylor says the current line-up has benefitted from the recruitment of a young rhythm section. We can, of course, expect a set chockfull of the "hits".

"We do stuff like 'Rosalyn' and "SF Sorrow' with a blues section featuring slide before throwing in some newer stuff." Dick says. "Our original bass player, John Stax, is living near Melbourne so we hope to get him onstage."

Pressed if the set will be turned down to accommodate two small Sydney rooms that are on the calendar, the answer is predictably in the negative.

Taylor looks on in admiration that the Stones are still Rolling and last connected with Keef when the band played Dick's home turf, the Isle of Wight, in 2007.

"We had a long conversation," he says. "I'll be happy to see them do 50th anniversary shows and it would be great if they asked their old bass player to get up and have a play.

"Of course I'd have to have no other commitments - the Pretty Things would come first," he adds - probably only half-joking.