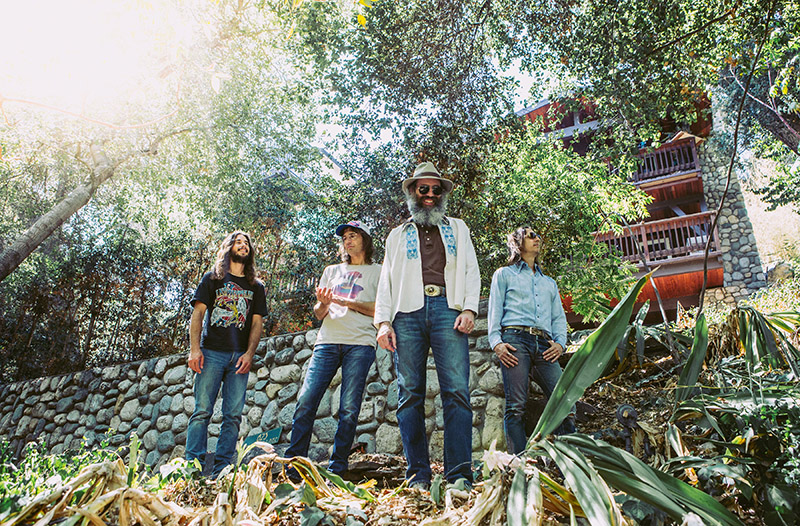 You grew up in Humboldt County in northern California, the demographic of which you’ve described as a mixture of hippies, rednecks and drug dealers. To what extent did that contribute to your sense of America, American identity and American culture?

The first Howlin’ Rain record and the second had some pretty good hold over from living here, but by that time I was living in the Bay Area in Oakland, and Santa Cruz. But both of those places had their own brand of fierce individualism or laboratory DNA melding. It’s one of those things about living in a remote area that has its own heavy culture, it’s kind of a like a lab experiment, instead of ‘the hottest, latest trends sweeping through Los Angeles’ and everyone being affected by them, it’s just sunlight, rain, different elements, breeding through those different aspects of human culture, as well as the arts scene, the music scene, the underground weed culture.

I said to my Howlin Rain drummer, Justin, who lives down in Los Angeles and I’ve recently moved back to Humboldt after my wife and I bought a house up here, that it’s like you’re down in the bushes, scrabbling around and if you lift your head up and everyone else stands up at once out in the wilds and you realise that there’s thousands of people around, foraging for things like you under the bushes. But when you’re down below, you think you’re all alone in the bushes.

I think the economy up here is like that, the cultural vibe, the sophistication of the artistic environment. You can go down any country road and you think you’re 5 miles from anything but you can peep up above the brambles and at the right time you realise there’s this incredible matrix and network of culture and underground culture.

It’s unlike anywhere else I’ve been in the world, partly because most places that are this isolated in the United States, there aren’t that many places that are this far from a major metropolitan area that have a university, multiple colleges, multiple industries, artistic culture that really give it a pretty culturally endowed existence, while also being at the end of the world. There’s places in Alaska, but even then it’s a different vibe.

I guess I try to reconcile it by trying not to simplify it. One of the things that I felt let down by in the Trump years and the pandemic years in this country was the over-simplification of the sides that people are on. In the media, and in the political side, the Republicans, the Democrats, Trump, they wanted to make it look as cut and dry as possible, that we’re on the break of civil war, the brink of collapse in the United States.

The issues are true – the spread of nationalism through countries, the rise of nationalism in popular political culture was, and is a very frightening thing – but that doesn’t mean that things became black and white, singular, mono existence. It was just as complex as it was before and getting more and more complex. I felt that people were the same way. So the disappointment in all that was that everything seemed to boil down pretty quickly, even amongst the civilians that had an opinion about the political climate, it was ‘I’m right, they’re wrong, this is what they stand for and I stand over here for this and that’s all there is’.

When you live in Los Angeles, or New York City or the Bay Area, then that might be true because you live in an environment and you’re left-leaning, you live in an environment that backs up your own thought process. There aren’t a whole lot of other people in the discourse saying ‘I’m a Trump voter!’. In Oakland, Berkley, once in a while you’d see someone driving through with a Trump sticker but it wasn’t a major outpost. But you’d go to other places, I toured all through the Trump years and it was a very complex America and the people you’d eat food with in late night diners, people you’d gas up with at the gas stations, they come from all different thought processes and the complexity was very evident to me. It was seldom I ran into any of the cartoon characters you’d see on the news.

That’s a long-winded way of saying I try to reflect that when I’m writing about those things. I don’t want to write a song that’s just about black and white or A and B. It’s the organic nature of things that’s important. 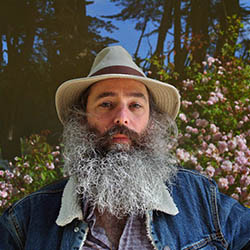 What was your original vision for “Dharma Wheel”, before the whole pandemic thing got in the way? To what extent has that vision remained in the record you eventually released?

We recorded basically twice as much, maybe more than that, than appeared on the Dharma Wheel record and we’d been rehearsing a lot and I had a ‘concept’ for it, but it wasn’t going to be a rock opera or anything like that but sometimes when you’re taking on something like that and it could be a double or triple album, it’s kind of nice to have this central concept for it.

You don’t want to make a rock opera like Pink Floyd’s “The Wall” or anything but you can get some central energy, like on Hendrix’s “Electric Ladyland”, just as a signpost that’s followed all the way through. You feel like you’re on this big journey. And I tried to do that with the “Dharma Wheel” record.

We were touring a lot and going out. I could pay the band members for touring and put the rest of the other money into this studio effort but when the pandemic hit and we came off the road, everything froze, after some months of realising we were going to be in for the long haul, logistically, I just realised I wasn’t going to have $3000 from touring to finish this thing, it was a case of ‘let’s just finish this thing’, see what that would break down to. And I think it broke down to an album that was better than what some sprawling masterpiece would been.

On “Dharma Wheel”, especially songs like “Don’t Let the Tears”, you continue the love for that 70s rocking vibe that underpinned Howlin’ Rain from the beginning. What is it about that ‘70s feel that inspires you?

I don’t know exactly. For Howlin Rain, that music is what I chose for the group to inhabit. Now people like at 70s rock as being an old school thing but there was a time and place, in the early 70s, rock musicians were breaking a lot of rules, it was very forward thinking at the time, it allowed them to harness a really high quality of music and care for quality of production and songwriting and to take chances and break the mould each time.

If you listen to the Beatles or Stones or The Who, not to even get into the cult bands in Germany or Japan or wherever, they’re constantly pushing the envelope trying to find new ways to expand popular music and to flip it inside. And here we are decades later, music of all types has been turned inside out, so to make something truly experimental, it almost had to be unrecognisable as music at some point because the boundaries have been well pushed.

Even by the late 70s, 80s, 90s, the boundaries have been pushed to such outer limits that you’re starting to try to subvert the genre completely. Like Black Metal, it’s going to a place that’s so extreme, that instead of pounding rock’n’roll in its extreme, it almost becomes ambient in its extreme. So it’s been completely turned upside down just to try to break new ground to escape the genre trappings.

For Howlin Rain, I like to push the edges, but I think the thing about this group – because I’ve been in other groups where we’ve tried to push the boundaries a little harder – with this one I wanted it to be a little endowed with music you’d hear on AM radio and you’d bang on the steering wheel of your truck when you’re driving around the back roads. It’s supposed to be engaging and almost have a feeling of time and places. It’s a creepy question! See, I went all over with my answer! Everyone takes something with what they’re doing from something else.

I think where you can fail pretty quickly is trying to be ‘original’. What you really want to do is to try to be authentic to your own voice, in the language that you’re using.

Do you want Howlin Rain to make people think about American culture or just to have a good time?

Hopefully both. There’s very little music that, in one way or another, you can’t enjoy or have a good time with if it’s your type of music, no matter what’s being said. Look at how much fun people had listening to gangster rap and it’s just about murder, rape, money, things that aren’t in any way positive in the world that you’d want to truly celebrate. Yet lots of fun times have been had and it can be really fun music, partly because we know everything should be on the table for art.

Americana is a concept as prone to misunderstanding and misuse as psychedelia. What does Americana mean to you and do you think it has any relevance to Howlin Rain?

It’s interesting, people started saying Americana in the reviews and whatnot. Maybe it was in our press release for this record. Americana is a term we hear a lot about, a lot of times it’s guys playing washboards, old time country music or alt.country. But I do like it for Howlin Rain, especially for The Dharma Wheel and Alligator Bride because I was writing about these American landscapes and American characters who’re just lost in this hurricane and time slip and slippage of the truth, the present and the future.

And I thought for lack of a more creative term, there’s something cool about the term Americana being used for that, in the same way that band X in its time, someone said ‘that’s Americana’ rather than LA punk. So I like it! But I never said it about myself. But like when you’re young and wear your mother’s high heels around the house and you think ‘Hey, this feels kinda good!’