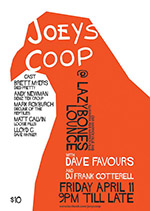 Roxburgh formed Joeys Coop late last year after Decline of the Reptiles was inexplicably disbanded from underneath him, after securing a six-figure deal to record overseas.

Venue for the show is Lazybones Lounge and supports are Dave Favours and DJ Frank Cotterell. Doors open at 8pm.