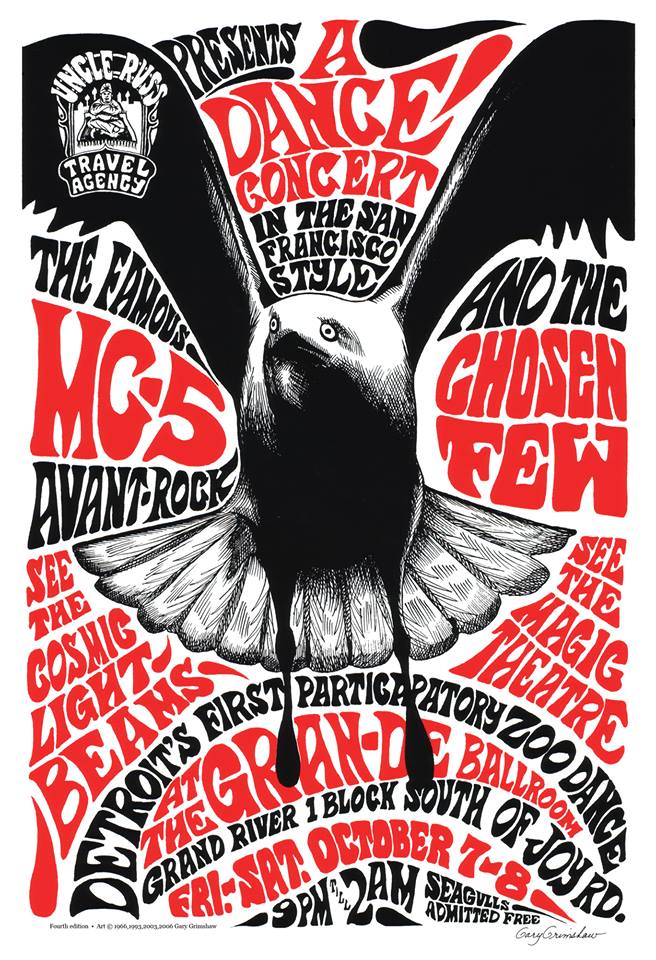 Grimshaw was one of the mainstays of the Grande Ballroom scene working as one of two in-house artists for the legendary Detroit venue. He provided art for the MC5, the Stooges, The Up, The Rationals and scores of other ‘60s and ‘70s bands, and was Minister of Arts for the White Panther Party.

Grimshaw was raised in the Detroit suburb of Lincoln Park and was a childhood friend of MC5 singer Rob Tyner. His highly distinctive, psychedelic artwork was a pathfinder for countless imitators.

Detroit greats are rallying to play at "A Night of Grand Love", a fund-raiser in Gary's honour at the Macomb Music Theater, hosted by Doug Podell of 94.7 WCSX, on Saturday, March 22.

A showing of Tony D'Annunzio's award winning film "Louder Then Love - The Grande Ballroom Story" will be followed by live performances by Gary Quackenbush from SRC, Scott Morgan of The Rationals and Sonic's Rendezvous Band and Dick Wagner and Friends from The Frost. The proceeds will benefit Gary Grimshaw's family and wife Laura Grimshaw.

The family has insurmountable bills to pay so the Detroit and Michigan rock community is stepping up to help. There will also be an auction of classic memorabilia (some from Gary's personal collection.) Many more special guests and friends are expected to play. Doors at 4:30 Donation of $15 for movie and concert or $10 for just the concert. You can join the Facebook event here.