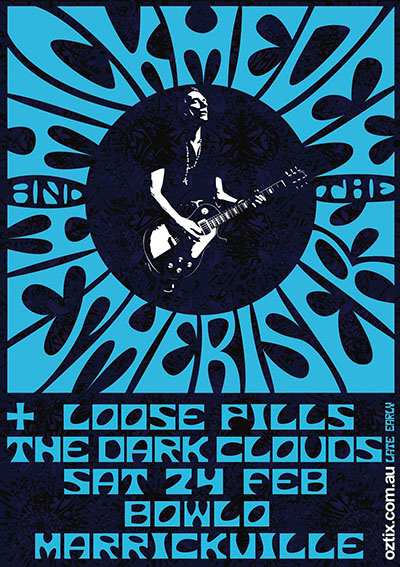 This will be a different lineup of The Mesmerisers since their last Sydney appearance. Brian Mann (Ed Kuepper, Wildcats, The Girlies, The Screaming Tribesmen, Lime Spiders, Figtree Renaissance) remains on guitar. Lois Andrews is on bass and Michael Charles (Shy Impostors, Lipstick Killers, Screaming Tribesmen) is on drums.

MIck Medew and The Mesmerisers are a strong draw in their home state and have played choice supports to the likes of The Damned, the Sunnyboys, Radio Birdman, Died Pretty and The Aints.

Opening band Loose Pills are one of Sydney's most accomplished power pop outfits, drawing members from The Barbarellas, The Scruffs, the New Christs and the Lime Spiders.

The Dark Clouds (who will close the night) are from Wollongong and are about to release their second album of Dictators-Radio Birdman influenced hard rock.