"Portraits, Punks & Pits" lifts the lid on 25 years behind the lens 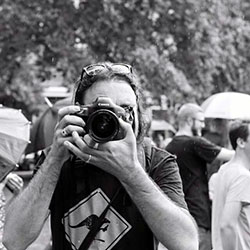 Rod Hunt is a passionate sharp shooting Sydney music photographer and has been perfecting his craft for more than 25 years. Now an accomplished and sought-after snapper, he has many published works and awards under his belt.

As a teen, Rod frequented his local music venues, shooting punk outfits such as Hard-Ons, Massappeal and the Hellmenn, at places like Sutherland Royal Hotel and Penshurst Den, the Lansdowne, the Journo’s Club, the Hopetoun and the Evil Star.

“I noticed that hardly anyone was taking photos of these bands and initially I simply wanted to document them,” he explains. “That grew into wanting to try to capture the energy and excitement that I felt when I was watching them play.

“This was pre-digital photography, so it was less common to see people at gigs with cameras. That’s still a big part of what drives me - trying to capture the energy, excitement, action, personality and mood of a live performance in a still image; I still find it challenging every time I shoot a band.”

Hunt’s impressive catalogue has been featured in the bulk of key music publications including Kerrang! (Australia and UK), Terrorizer (UK), Metal Hammer (UK), Rolling Stone (Australia), Australian Guitar, Jmag, Kerrang! and Blunt. He was the major photographer at Drum Media (now The Music) for many years and now holds that title at Unbelievably Bad magazine.

He has photographed all of Australia’s major music festivals on numerous occasions – the Big Day Out, Soundwave, Homebake, Splendour in the Grass, Byron Bay Bluesfest, Dig It Up!, All Tomorrow’s Parties, Golden Plains and Meredith Music Festival. Rod has also covered music festivals internationally, including Rebellion (England), Hellfest (France), With Full Force (Germany) and Wacken (Germany).