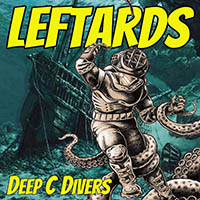 “(Do Tha) Blobfish” is a surf-splattered salute to Mutant Beach Monster Parties with horror flick samples punched in. Light on lyrics and heavy on the bottom end. “Breach Birth” is not backwards in coming forward with its message for a misanthrope. And speaking of, there’s no mistaking the presidential target of “Orange Clown”. “Party Drugs” thumbs its nose at pill-poppers everywhere and is paradoxically pop in its sound, relatively speaking.

Of course you can grab a copy of the artefact on Bandcamp or settle for second-best in th form of a digital download. Or by the physical product and get both.