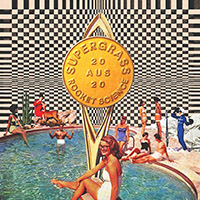 The Supergrass track belies any prejudices that these guys were just another Pommie pop band that didn’t (or doesn’t) rock. It’s another live effort from a 2020 live-to-air and sounds huge. Main man Gaz spits out lyrics that could be as much about the frustrations of a global pandemic as mental ill-health. Dark and powerful.

Pressed in a one-off run of 300, the mail is that only 50 remain so you know what to do. A click here will take you where you need to be for fulfillment.