Past Masters Volume 1 - The Bils (self released) 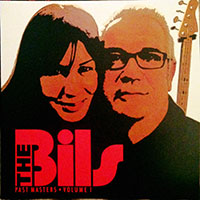 Going in with open ears and no expectations, this unassuming album is a revelation. It launched with little fanfare and was spoken about online but was unheard by these ears until after a copy was pressed into my hands backstage at a gig.

Somebody said it was country. A little. It's copped a flogging on the CD player. It’s mostly warm and breezy blues-pop, from a husband and wife duo, one of whom you might know in their other guise.

The Bils are Bil and Michelle Bilson. They play everything between them (guitars, bass, keys and drums) and share vocals. Bil’s other gig is drumming with reincarnated Australian power-pop legends the Sunnyboys. He also played with The (Sunnyboys-related) Sparklers and the gloriously acid punk Doctor Stone. Can’t confess to knowing Michelle’s musical pedigree but it doesn’t much matter. The back story’s not as important as what's going on at the front-of-house.