myles gallagher - The I-94 Bar

Wrong Turn is a duo-grown-into-a-trio from Melbourne that puts the primal back into rock and roll. Two albums in, this single is the first new recording to make it into the record racks since the band became a three-piece and it hits the bullseye, right in the fucking centre.

Wrong Turn is Ian Wettehall’s band and what his c.v. (The Philisteins, The Freeloaders, The Lords of Gravity, Seminal Rats, Stoneage Hearts) doesn’t tell you isn’t worth knowing.

Don’t let the jokey cover art fool you. The A side comes over like Chuck Berry on 11, telling a story about a man called Johnny Collingwood who never left home. It’s seriously raw and sounds like it was recorded in a toilet. There’s enough fuzz in the guitar to rattle your fillings loose, the vocals growl and the engine room of Myles Gallagher (drums) and Pip McMullan (bass) deliver appropriate crash-and-wallop with powerful fills.

Flip it over and “Baby No Good” hits you in the solar plexus with equal effect. Vocally, there’s a touch of Hasil Adkins in the scream-and-stutter, reverb-soaked chorus (“B-b-b-b-b-b-baby no good!”) while the band sounds even trashier than pn the A. It's all recorded in glorious mono so you know it kicks like a mule. Score this gem at the band’s shows or hit them up on Facebook. 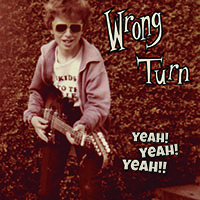 Hello I-94 Bar abusers and users. Well, it's Friday afternoon and the Farmhouse has been rocking to the new EP by Melbourne band Wrong Turn. This rockabilly-garage rock three-piece have just released their wonderful record on Cobra Snake Neck-Tie Records.

Kicking off this mini masterpiece is the title track, a rolling, stomping, rocker that, well, just fucking rocks. Ian Wettenhall (guitar and vocals_ sounds like he is having one hell of a good time. Myles Gallagher pounds those skins (he’s one hard hitter) while Pipon (aka Duane Pipe) on bass keeps the tempo with coolness to burn. Great opening track.

Track two is my personal favorite; “Gimme More” is where Myles’s drumming really stands out. Thumping bass with a stand-out guitar riff. It don't get any better. Oh, and it features an awesome lead break. “Gimme More”? Yes please, gentlemen.