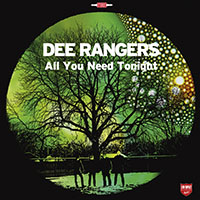 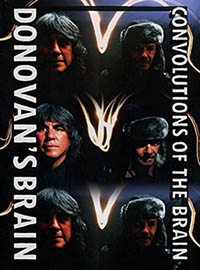 Fifteen years after it was recorded, this superb piece of Nomads ramalama sees the light of day as a split single with psychedelic collective Donovan’s Brain.

Recorded in Montana while they were sweeping through the nooks and crannies of North America, Sweden’s finest manage to lay waste to this rippling instrumental (written by studio owner and Brain ringmaster Ron Sanchez) like it was one of their own. This is desert driving music, simple as that. A big, fat fuzz bassline and tumbleweed guitars from the severely underrated pairing of Hans Ostlnd and Nick Vahlberg - supplemented by Sanchez and bandmate Richard Teece - make this something special.

Donovan’s Brain plays a whole different ball-game to the Nomads but the flipside keeps up the pyrotechnics levels. “Bread Man” is a Sanchez vocal-led heavy psych rocker fleshed out by Deniz Tek lead guitar. It’s over too soon. “Snow in Miami” eschews vocals and goes for a roughed up surf sound. It dates from 1998 with then-Brain guitarist Richard in place, adding some tasty skronk.

Career Records on the Web

There are certainties in life. You've heard about death and taxes. There are also the Nomads. Dependable, although never safe, they're the grand daddies of Scandi Rock and their latest is a compilation to walk over shards of glass for.

Once upon a time, the mere mention of a new album by the Nomads would provoke howls of anticipation from anyone with the remotest appreciation for rock and roll. The praises of Sweden's Godfathers of Garage Rock were sung around the world - and justifiably.