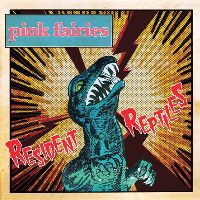 I have no idea why two versions of the Pink Fairies exist concurrently in the same space and time continuum. Maybe’s there’s some sort of trans-global psychic warfare underway. Bands do that all the time but it’s usually contained to the confines of a Tarago van. Perhaps both bands are happy with an anarchic state of affairs (after all, creating confusion was the Pinks’ way-of-life) or neither can afford to sue each other. Neither line-up contains Twink - so maybe that’s the answer right there.

But enough of that pesky context. If you want more, grab a copy of “Keep it Together! Cosmic Boogie with the Deviants and Pink Fairies” by Rich Deakin. It’s a great read – especially when you’ve absorbed “Give The Anarchist a Cigarette” by the late, great Mick Farren.

“Resident Reptile” is a dozen leathery songs of quality, delivered by a cracking band. Rudolph lays down a carpet of thick and warm, distorted guitar and overdubs a bunch of spidery leads. Davey’s wall of uncompromising thud provides a bottom-end big enough to do Kim Kardashian proud. Fox keeps it solid and simple.

Paul Rudolph was never an opera singer and his clipped drawl still suits the heavy blues stomp being laid down. On the flipside, much of the overdubbed lead guitar is anaemically thin.

In the face of that quibble, the songs, however, grow with repeated listens. “Old Enuff To Know Better” is classic Pinks boogie (written by Larry Wallis) with lyrics about backs against the wall and taking a fall. “Old enough to know better but much too young to care,” indeed. “Your Cover Is Blown” is a dirty psych blues tune with a jagged chorus. “Whipping Boy” briefly recalls “City Kids” before making its own mark with some nasty, scuzzy guitar.

“Apologise” is the wild card in the pack. Throbbing keys and a creeping feel underlay a grim commentary on the state of world affairs that could have been reeled out by Pink Fairies precursor The Deviants. It’s dripping in cynicism and a down-note on which to end the album but it resonates deeply.

There’s more than meets the ear in “Resident Reptile” but if digging out not-so-hidden meanings is not your bag, just turn the bastard up and enjoy the shit out of it. They might have a bit of dinosaur in them but the Pink Fairies, in their various configurations, thankfully aren’t extinct yet.