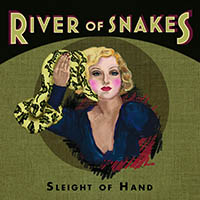 Distortion is the place the unskilled go to hide a multitude of sins, but in the right hands it remains one of rock and roll’s most powerful weapons. River of Snakes know this well and play it to their advantage. As befits a band that’s been around the block a few times, they also have a razor sharp sense of dynamics. Therein lies their strength.

Of course guitarist-vocalist Raul Sanchez is no stranger to the Australian underground (and overground, for that matter.) As a member of Magic Dirt, he was part of the aforementioned wave of optimism that music would change for the better, and he’s part of Midnight Woolf, who harvest the garage rock end of Melbourne’s musical field.

River of Snakes has been critically compared to Sonic Youth. That’s true in part - no more so than on the narcoleptic dreamscape “Mirror Mirror” - but there are also strong echoes of The Pixies and The Breeders.

In decades past, “Hovering” would be an international independent chart hit in multiple countries with its cooler-than-Kim-Gordon, atonal, Elissa Rose vocal and deft, rise-and-fall dynamics. Rose’s dry bassline drives “Talking” and her shared/swapped vocal with Sanchez is something of a core element of the band’s sound.

So it’s not just all about Sanchez’s heavier-than-thou guitarwork, which is heard to such good effect on the protracted, feedback-soaked closer “What Would Steve Do”. The grooves, left-field melodies and vocal arrangements are there, too. River of Snakes are far from being ‘90s revisionists; they just capture that spirit and smear it in distortion and pop.

The dry-as-dust intro to “Always Never” steps off a ledge and into an abyss of guitars, bounces all the way to the bottom, aided and abetted by Sanchez’s best vocal of the album. “Cool Like You” unfolds with disembodied menace before yielding to those jagged guitars. There’s more on “Break You” where Rose’s chorus plays against Sanchez’s downcast vocal. And all the time, Dave Payne’s kick drum nails it to the ground.

Sometimes it misses the mark - the ultra dirge-y “Into My Heart” highlights Sanchez’s vocal limitations – but for the most part this is one satisfying ride. Get yourself some snake oil here.