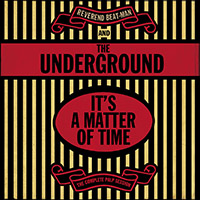 “It’s a Matter of Time” is 11 tracks of warped garage fun. Beat-Man describes it best when he calls it Doom Trash Blues. You know what’s in store when you hear the opener, “I Want To Fuck You Baby”, a semi-acoustic strum, whose central lyric is precise in its intent. It’s all downhill from there.

Other than carnal concerns (also expressed in “Lass Uns Liebe Machen”, which means “let’s make love”), the songs are about technology addiction (“Slave to the Phone” and “Banned From The Internet”), inter-personal communication (“Shut Up!”) and dancing (“Jesus Christ Twist”.) And I lied about dancing; welded-on Beat-Man fans will recognise that last one as the re-working of an older song.

The sound of The Underground is punchy and the playing tight, suggesting the combo quickly developed an understanding in a week spent living in each other’s pockets. The production is suitably uncomplicated and lets each instrument shine through.

Beat-Man’s vocal is an instrument in itself. Its default position is set to “croak”. Its owner switches up to a gravelly shriek or a guttural growl, as the mood (and song) takes him. As the old saying goes: If you think it’s an acquired taste, you need to acquire some taste.

You need lyrical depth? “Banned From The Internet”:

Milan Slick is in a synth duo with the Rev and brings a touch of Suicide’s edge to many of the songs – especially the doom funeral plodder, “Mongolian Talks to Alien”.  Graf’s drumming on that one adds a desolate touch of which the old-time Bad Seeds would approve. She’s also capable of great subtlety – as the relatively tender crooner “It’s a Matter of Time” attests.

“Get Down On Me” is a warped junk shop glam pop reject that’s been bent into a new shape, while “Banned From The Internet” puts on a country air to be the real odd man out among these 11 tunes.