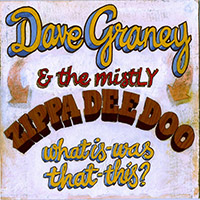 There are more musical and cultural references in the latest Dave Graney album than a shelf-full of fourth year undergraduate sociology theses. Over a baker’s dozen songs, “ZIPPA DEEDOO WHAT IS/WAS THAT/THIS?” - we’ll call it “ZIPPA” for short - is a wander through the backblocks of Graney’s singular musical mind.

It’s self-described “classic rock” but don’t expect Journey or Van Halen to spring out of the speakers. “ZIPPA” is in-the-pocket, pop-rock played by a well-drilled ensemble. Drumming national treasure Clare Moore, consummate bassist Stu Thomas and jazzy guitarist Stuart Perera have been in more trenches together than the cast of “Hogan’s Heroes” and Graney’s respect for stylistic boundaries is on a par with Nancy Pelosi’s affection for Donald’s pipe-dream Wall.

Opener “Baby I Wish I Could Have been a Better Pop Star” is classic Graney: There’s more piss being taken here than in the bathroom of a highly-paid Macquarie Street urologist, and you don’t have to wait for the results from the lab to know who Dave’s talking about.

Self-obsessed? Maybe. But a man’s gotta write about what he knows. Being crowned King of Pop by an industry with little or no clue is hard work. Ask Tom Gleeson. There’s a slinky ’n’ swampy original mix included for good measure, one of five alternate takes of various songs on the CD version, some of them previously available digitally.

If you haven’t worked out yet that Graney is a storyteller par excellence, you haven’t been paying attention. “Gloria Grahame” is one of those songs. A word game story about yet another Hollywood luminary with a secret life, draped in psychedelic colours and a deep groove.

“ULTRAKEEF” is a surreal-ish Stones-inspired fuck you with honky tonk cowbell accompaniment that gives a middle finger to enough people and places to make Bill Bryson think he has competition. Well, fuck you Bill.

“Your Masters” is a politically-charged piece, written an eon ago but picked up and dusted off by The MistLY. “Song of Life” manages to appropriate the Stevie Wonder lyric of the album title. A second version, captured live, weaves in some distorted keys, courtesy of Coral Snake Robin Casinader, to great effect.

“Is That What You Did?”is Graney’s take on the Allman Brothers (a group that’s he’s written about for a magazine) although you’d be hard-pressed to find any bluster or traces of good ol’ boys, and it’s way more ethereal than “At Fillmore East”. Those cosmic chords might inspire you to drop a trip or “Eat a Peach”, depending on what’s in season, and the whole thing has more length than a Grateful Dead jam, er, song.

“Where’s My Buzz” comes in two versions and it’s another of those Talking Graney Blues things that you’ll instantly love or hate. A snaking and snakey seven minutes. Jam it out and see where it goes.

One man's noir lounge is another man's psychedlca. So “ZIPPA” yourself up for an unconventional ride. The MistLY might wear stylish clothes but they’re as subversive as fuck.