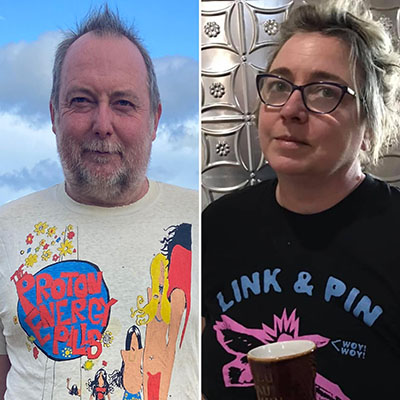 2. THEE CHA CHA CHAS escaped Mexico for a rare run of NSW gigs at Woy Woy, Mayfield, and the Golden Barley in May/June 2021.
We’d not seen THEE CHA CHA CHAS since releasing their ‘It’s Coming After You’ 7” EP in 2020 (with HOGWILD RECORDS), and not been to a gig of theirs since 2020. They give good hugs. They also released a beaut live cassette this year via WILD ANIMALS RECORDS. Its roster includes GARLIC NUN and JON FREE (The Frees/Penthouse/50 Tons of Black Terror/Gin Palace) and RAUL SANCHEZ from MAGIC DIRT.

3. DRUGS IN SPORT: “At Least We’ll Always Have Rock’n’Roll to Fall Back On” LP
This was our first release for the year (in November!), and it’s a proper belter; a powerful, guitar-driven, scathing Australian record. Songwriting; sound; everything. We are down to the last few copies.

4. “HIGH TIDES, MORE CRIMES” by MD HORNE’S LAST CALL
Our second release of the year, is the most mellow, moving album we’ve put out by far – our first split release with overseas labels (FOLC RECORDS and LA VILLA NOVA), and it features JOHNNY CASINO. MARK HORNE was brimming with song when he recorded it, and he put together a genius muso mob with no hell or high water. It is deadly!

5. HARD-ONS (aka CLANDESTINE SAUSAGE) Link and Pin, 10 December 2021
When our partner Mark Fraser hinted that he’d lined up the HARD-ONS for our first birthday show, we were SPEWING. Very exciting! In WOY WOY? At OUR PLACE! Get fucked mate! This was their first live gig with TIM ROGERS as frontman, so the nerves were high; the punters were wired; the place was at capacity. And then it happened: a raw, fired-up, punk-arse assault that could not stop (until our powerboard blew out; then it started again). After the initial shock, a human horseshoe formed around the band, soaking up the steam and sweat and riding every savage note. Link and Pin morphed into a lawless speakeasy and we were all 15 again. It was a smashing concert. We thank the HARD-ONS for playing… HARD!

6. PROTON ENERGY PILLS 7” TOMBSTONE B/W REVOLUTION
This is our final vinyl release for 2021, officially out on New Year’s Eve 2021. The reborn PROTONS features original singer/guitarist (and main songwriters) DAVE CURLEY and STEW CUNNINGHAM with a bunch of younger musicians from a new generation helping out: BRETT HOTTES on bass, GRANT LAWRENCE on drums, and JONNY TURCINSKIS on second guitar. We’ve loved PEP since we were little, and like the HARD-ONS show mentioned above, releasing this record reminds us that 2021 wasn’t such a kick in the JATZ after all. More here.

7. PILOTS OF BAALBEK “UNCONTROLLED AIRSPACE” (CD/DIGITAL)
An excellent, original ‘70s glam/space rock/boogie/proto-punk album by PILOTS OF BAALBEK outta Canberra. It was released last year, but frontman/guitarist ADAM AGIUS (ex-ALCHEMIST) gave us this CD, and we finally bought a CD boombox thingie to listen to it especially. If we were to retrospectively release another vinyl LP (as we did with PRECURSOR), it would be this. Available here.

8. PUNTERS
We salute you. Thanks for getting off the lounge.

10. HISS AND CRACKLE, WALLSEND
This is still our favourite record shop/venue/label in the region, which perfectly radiates the happy energy and good vibes of Au-Go-Go and Waterfront. Plan a trip to Newcastle when the plague lifts; make a day of it – and pop in to Link and Pin for a yarn and one of our WOY-FAMOUS banh mi on the way. We’re back on deck for six gigs in seven days from 4 January.