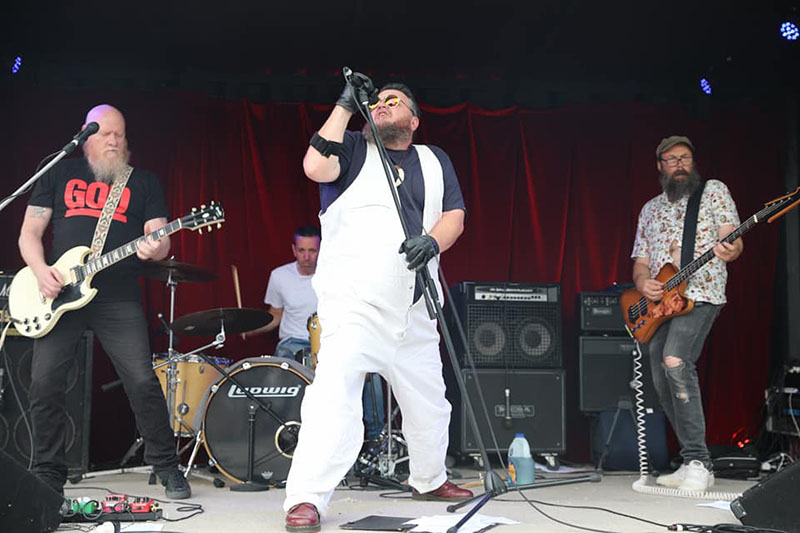 2. Leadfinger at the Marrickville Bowlo.
There was a period not that long ago I thought to myself I may never get to see Leadfinger again. I cannot put into words how happy it made me to see Stewy and the lads perform again.  What an emotional experience to see this band back on stage. Vocally Stewy being bigger and better than ever. How the hell does that work? The material, the swagger and what appeared to be a genuine zest for life and an overwhelming appreciation for being appreciated. Well that was the first one. I was lucky enough to see the lads do it again in November.

These guys are such an incredible act. They’re too bloody good. Why aren’t they on every big festival in Australia. Why aren’t they on the bill of every festival in the world? They’re a stadium band playing pubs. Live on Jimmy Fallon, James Corden, Graham Norton, “The Late Show”, “The Late Late Shows,” “The Sound”. They should be playing live on every TV show there is. Part 70’s rock, part middle of the road country and a whole lotta Aussie Folk!  No, not folk. I didn’t say Folk, I said Aussie Folk! You know, Aussie folk as in “How to make gravy?” or “To Her Door” kinda Folk. The Saints without Ed or Ivor “All Fools Day” Kinda folk. Leadfinger make me happy.

Also got to see the bastard sons of Lynyrd Skynyrd and The Powder Monkeys that night. Swedish Magazines. What a killer live act. How have these guys never been on my radar?  Powerfull, charismatic band. Super entertaining. Their "I Wish Life Could Be… best of 2004 - 201" CD is currently on high rotation in the car. What a voice. Don’t miss this Bogan Powerhouse Boogie band or any stripped down version of the Walker brothers when they’re in your town.

3. Vi-Queens
A young lass put together this playlist. Something every painful Gen Xer that always bangs on about how there are no decent bands anymore should be forced to listen to. We all know these people right. That pillock that claims they’re a music fan yet think there hasn’t been a decent Aussie rock band since The Screaming Jets. The same putz that hasn’t been to a live show since the last Whispering Jack  farewell.  So with the simple stroke of a touch screen, a 13 year old uses her devices and comes up with the goods. Channelling a Norse Warrior Queen, the Goddess of the Night and the Mother of the Fawn this playlist is a killer. If you are up for a listen, you just may find your new favourite band for 2022. I know I did.

4. Spotify.
Yeah, yeah I know but I’m not wearing my artist hat remember. Today I’m a punter and you don’t need to worry that there is no Donny Sutherland or Molly Meldrum handing out musical crumbs anymore. The music I liked was rarely on those shows anyway. You had to search for it. Today is no different, it's just in a different format. Spotify is an awesome tool to find music and it is what you do with that information that makes a difference.

There is a growing trend of Artists putting together play lists of some of their favourite bands.  My favourite playlist at the moment is put together by the front man of Lucifer Star Machine. If you’re a fan of Action Rock or better still, Rock Action you need to listen to this for a while. So many current, quality bands out there. If you find one you like, shout it from the rafters.

5. Nunchukka Superfly – “Aussie Exorcism”
I was never a big fan of the Hard-Ons, but I guess that says a lot more about me than it does them.  Maybe it’s because they look so good without shirts on. Yes, probably some Freudian baggage I’ve been carrying around from a High School gym class. Maybe it was as simple as having my head stuck up my arse back then. Everything seemed so black or white in my early 20’s and I obviously couldn’t grasp the concept of being Genre Fluid. I was listening to “Stoneage Romeos”, The Sunnyboys, any band wearing a paisley shirt and I was dead set mad about Painters and Dockers.

Then there was that time I was working in retail and Blackie walked into the store.  Star struck, with a stupid cheshire grin on my face as he approached the counter I blurted out “Wow! It’s not every day I get a Hard-On in the shop”… Awkward silence. You could cut the air with a knife. I’m thinking to myself how funny that was. Pretty sure he was thinking what a dick head I was. Well I do know he never shopped in that store again. So yeah, maybe that has something to do with it as well but none of the above has much relevance to the Nah mate, you can’t punch a ghost 2020 release.

Yes it has taken nearly a year for me to have the opportunity to give this record the time it deserves. I can only describe this album as creative expression. Total genius at times. It sounds like they did it for themselves. It’s not about appealing to me because they don’t care what I think. It’s in ‘em, and it got to come out. At times this album rattles the windows, at times a gentle tap on the shoulder with melodic lullabies to soothe a colicky child and in-between all of that a ship load of quality.  Enough woodwind, cool riffs and harmonics to sink a battleship. These guys deserve an Order of Australia for their incredible service.

6. Pist Idiots- “Idiocracy”.
As I’ve already mentioned in one of my ramblings I have a retail background. An old rule when it comes to sales is the 3 Ps. Position, Price and Packaging. Pist Idiots knocked it out of the park with this offering. The packaging/presentation for this album is a bloody corker.

So what about the ingredients? I’m a Gen X-er right, so gender bending isn’t anything strange to us. Fender bending?  Yeah I did a lot of that back in the day. Mind bending? Yeah did a fair bit of that too but I must say for this GenX-er, genre bending? Being genre fluid is something I’ve always struggled with but with more recent Exposure Therapy and a little CBT I’m slowly coming around. SLOWLY! Pist Idiots debut album Idiocracy. It’s undoubtedly Australian. Intelligent. It’s guitar based pub rock but I’m not going to pigeon hole this record anymore than that. Just trust me. It’s good. "She Yells Jack" gets my 2021 earworm award.

Look after this place!

7. Tumbleweed 30th anniversary show.
Virtually every  member of Tumbleweed, past and  present has a connection with the Dark Clouds. Getting a support slot with them this month, in our home town on their 30th anniversary run of shows was such a treat. Getting up on stage with Richie and the boys was an absolute blast. Rock n Roll gentlemen. Chivalry is not dead. Thank you Tumbleweed  (OK I had my muso top hat on for this one) and they were great!

8. East Coast Low - Seas On Fire
I like this band. Non conformist and classically Australian in a "Bus to Bondi" kinda way. Blue collar in a way that reminds me of what Wollongong once was. Michael has such a unique voice. All the players are great. It’s Aussie pub rock. It’s penetrating, sagacious. It’s bloody good. It’s on high rotation at my place and I think it’s their best work so far.  Buy it here.

9. Heavy Roller – “Heavy Roller”.
Well I love the artwork, the font, the blue vinyl, the fact there is no Side A or Side B rather Drinking Side & Smoking Side. Well that’s a good start but does it deliver?

Last year I voted “Reptilian Overlord” by The Cassanovas as my favourite album of 2020. I’ve played these two albums back to back and there was no standing eight count applied and trust me that is a bloody big deal because I rate that Cassanovas album as an Australian classic. Funny, I don’t recall seeing it in the recent “Rolling Stone” Top 200 Aussie albums list. I recall Savage Garden, Kylie, Guy Sebastian but no “Reptilian Overlord” by the Undefeated Heavyweight Champions of Aussie rock n roll. I call bullshit on you Rolling Stone. Sorry, I digress. Heavy Roller is a contender! The album is a cracker. It’s terRIFFic. Part Stoner, part rock, a pinch of 80’s hair metal, a sprinkle of “Crazy Train”, a heavy dusting of Bad Motor Finger and a tonne of talent. Sounds like your thing? Buy it!

10. Spiders – “Killer Machine”.
So how come so many great Australian bands these days come from Sweden?

Listing Girlschool, Motörhead and Radio Birdman as influences, how can these guys not be good? I 1st came across them via Spotify. I had been reading up and listening to The Neptune Power Federation and when you scroll down a little there is a groovy Spotify feature that shows other music that fans of (any particular artist you are looking at) are listening to, and there were Spiders. So I checked out and followed their socials, subscribed, perused their YouTube channel and purchased their latest vinyl offering. See what I mean? All parties can profit if Spotify is used correctly.

Now this album “Killer Machine” was released in 2018 but I didn’t catch on to this band until 2021 so it’s on the list. Sure the album may not grab everyone; it’s got a nostalgic grandness to it that means I can't call it groundbreaking, it may leave you feeling like it’s all been done before but I say, how bloody lucky are we that it’s still being done? I think Spiders are all class. Excellent in my opinion. I love this stuff. I love this genre, whatever it’s called. I’m going with whatever the opposite to Cock Rock is. Thank you, thank you, thank you Spiders.

Spiders! Spinning the web that caught the ghost of the iron butterfly.

SPECIAL MENTIONS
1. Rossy! Pro bono bass rig tech, lighting guru and sound engineer. Bass player extraordinaire for the timeless Jupiter 5, Facebook comedian, guardian of the Left and for being an out and out good guy.

2. Link and Pin in Woy Woy, NSW, for an outstanding team performance prior, during and after the show. That’s the way to run a business)

3. Private Function (a band I coulda, shoulda, woulda seen so many times this year but the universe was plotting against me)