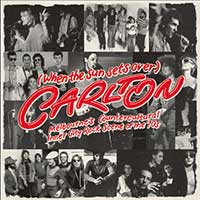 Taking its title from the famous song by the scene’s best known band Skyhooks, the album traces the countercultural scene’s development from its beginnings in venues like the TF Much Ballroom and Carlton’s La Mama and Pram Factory theatres through Skyhooks breakout success to the thriving pub scene found in legendary venues like Martini’s and the Tiger Lounge. It presents also a glimpse of the birth of Melbourne’s hugely influential 3RRR-FM, which was born out of this scene.

The album’s eye-popping logo/title design was drawn by legendary ‘70s Australian cartoonist and cover/poster artist Ian McCausland. To coincide with “Carlton”, Festival will also be releasing Expanded Editions of the classic albums by two of Melbourne and indeed Australia’s most-loved bands of the late ‘70s and early ‘80s period; the first two albums by The Sports - “Reckless” and “Don’t Throw Stones” (from ’78 and ’79 respectively) - and Jo Jo Zep & the Falcons’ breakthrough album from ’79, “Screaming Targets’”

All three albums, which were originally released on Mushroom and have been long out of print on CD, have been remastered from original tapes. Each of these three titles takes the original album and adds a bonanza of additional high quality studio and live material, tripling or even quadrupling the original playing time to really give the listener a broad sense of what the bands were about at the time.

With Sports singer/main-man Stephen Cummings, and Jo Jo Zep himself, Joe Camilleri both currently in the spotlight again with new albums (Stephen with his latest solo album, Joe with a new Black Sorrows album) and with Stephen the subject of a new documentary film, itself called ‘Don’t Throw Stones’, these particular releases provide a timely chance to revisit the seminal early work of two Australian music icons and their bands of the time.