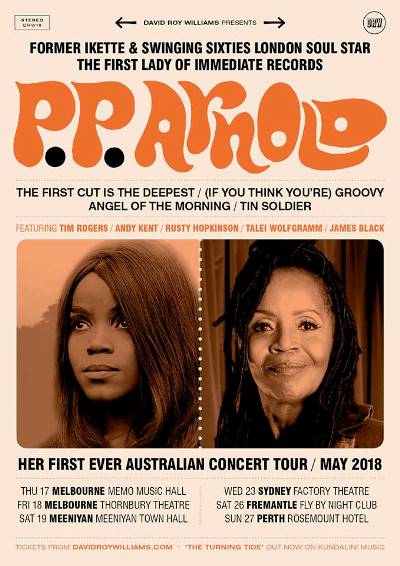 Her timeless work has earned PP an ardent following amongst fans of ‘60s British rock and pop in addition to lovers of classic soul, and some of her early dance numbers are considered Northern Soul classics. Her status as an icon of her era when she starred alongside old friend Marianne Faithful in the final episode of the original series of “Absolutely Fabulous” in 1996 (for which she and Marianne especially recorded a new version of the program’s theme song “This Wheel’s On Fire”).

With her memoir soon due for publication and a new album in the can, co-written and produced by the Ocean Colour Scene’s Steve Craddock and including a couple of duets with long-time supporter and fan Paul Weller, 2018 promises to be a big year for PP Arnold.