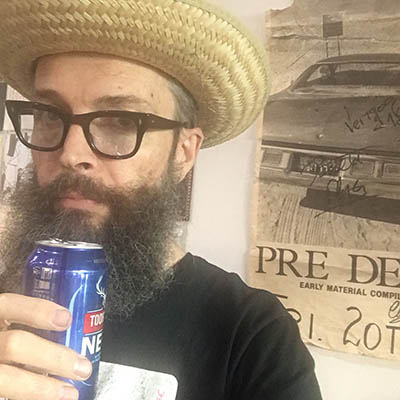 While the label releases felt like a great win in terms of cementing a bit of local music history and all that airy-fairy stuff, there was also great loss too as three key musicians of the underground post-punk Christchurch scene (and all of whom played in the Victor Dimisich Band) Peter Stapleton, Allen Meek and Mary Heney passed away – as did Dave Kusworth, the Brummie who kept the spirit of early '70s Stones and the Faces alive with Nikki Sudden, The Jacobites and  a slew of solo albums. And to top it all off, my pre-teen suburban self did lament the loss of Eddie Van Halen, as did the guy who walked in on the morning after the news broke out and bought all the VH albums we had in the shop within minutes of flipping the sign from closed to open.

And now for the Top Ten…

1. GIG OF THE YEAR: Ed Kuepper at the Outpost
Each time Ed Kuepper makes a rare hometown live appearance, you wonder where he’s going to take his songbook next and whether a new tune will get a debut because 50 albums of tunes clearly isn’t enough for any diehard Kuepper Trooper or Ed Head. In recent years, he’s shifted away from having drums not only on record but on the live stage too. This set-up brings Ed’s distinctive voice and of course his guitar to the fore without the pesky rat-tat-tat sounds getting in the way from the guy on the riser.

I’ve always felt like Ed's our own Neil Young or Richard Thompson – somebody who can write a great tune, play a mean guitar in a variety of different ways while always being daring enough to try new things by challenging their audiences.

2. LIVE STREAMING SHOW(S) OF THE YEAR: Steve Kilbey
Kilbey was there in his Coogee flat at 6pm every Monday night beaming to his Instagram followers week after week for what seemed like a year. Singing and playing directly into his phone with no outboard effects, the listener / fan quickly understood that while he wasn’t going to pull out any glam stompers from his Canberra days in Baby Grande, Kilbey was certainly primed to start making chord shapes on the 12-string acoustic to almost anything he’s written since "Of Skins And Heart" – even if he could only remember parts of them.

3. RECORD LABEL OF THE YEAR: Eternal Soundcheck
Matt Kennedy of Kitchen’s Floor and his imprint hammered out around half a dozen cassette albums this year – which could potentially amount to great deal of traffic island spaghetti if your Toyota Corona’s deck decides to mess with you and respective jams. Luckily they come with a download code. Almost all of them surveyed the tiny corners of Brisbane underground rock scene with current acts where you’re not quite sure if they’ve since broken up like Star Slushy and Bin Licker. Blend all of that in with a bit of much-needed retrospection from the local days of yore with Meat Thump and Look! Pond and you have one no-nonsense record label.

4. AN ALBUM OF THE YEAR: The Apartments - "In And Out Of The Light" (Talitres)
Since The Apartments began their second phase in 1984 (having previously existed for a year in Brisbane in ’78-’79), the bulk of their fan base have been out of Europe. And so while all of the band’s Australian fans could easily fit in a taxi, copies of the LP still managed to reach our shores via the slow boat of Australia Post from (wait for it) France of all places.

Peter Milton Walsh’s music is what you’d regard as a form of adult contemporary in the same way Scott Walker was, or if we wind the clocks back even further, Jack Jones, with the touchstones of suited-up coolness despite the sweltering heat of a Sydney summer which must surely wreak havoc on his hair.

5. ANOTHER ALBUM OF THE YEAR: The Pits – "Sending You a Rainbow" (Cubbyhouse)
In 2020, Peter Macpherson worked out how to immediately sell out your pressing of a record: firstly, write a batch of catchy songs that whiff of Loaded"-era Velvets that you wished Jonathan Richman would still write and finally, press only 50 copies. Genius!

6. ANOTHER GIG OF THE YEAR: Stephen Cogle at Phase 4 Records
When the Velvet Underground bug hit post-punk New Zealand, The Vacuum, Victor Dimisich Band and the Terminals were among the hardest affected. Stephen Cogle sang in each of those Christchurch bands – y’ know, that musical town that isn’t Dunedin but is also on the South Island. Cogle just happened to be holidaying on the Gold Coast.

With a borrowed guitar that his old bandmate Bill Direen used only a few weeks prior, Stephen played his first ever gig outside of NZ. While offering stripped down readings of tunes from the aforementioned bands, he also sang tunes from his current group Dark Matter with his distinctive baritone voice and vibrato which at times shook the glass of the shopfront window.

7. REISSUE OF THE YEAR: Pip Proud – "De Da De Dum" (Half a Cow)
Around 50 copies of this album were privately pressed in 1967, and like the two he did for Phonogram were among the most original records to come out of 1960s Australia. A believer saw fit to have the record made then and this year, Nic Dalton did much the same. Everything about Pip’s music was individual – the lyrics, his singing voice which he used to carry it and the way he strummed the most basic of open guitar chords.

8. ANOTHER REISSUE OF THE YEAR: The Stooges – "Live At Goose Lake August 8th, 1970" (Third Man Records)
Friends who bothered to buy it or hear it illegally have muttered around my drum-damaged ears that this live recording from 1970 sounds terrible. Well (quite frankly) fuck them. If there’s a record out there with the word ‘Stooges’ on it and Ron Asheton’s on guitar (and sure, on bass too because he’s that kind of guy who could step down like that for the sake of songs and for his mate Jim) – chances are I’d want to add it to the wall of LPs or CDs for that matter. After all, the Stooges on their knees are better than most on their feet. Thanks Jack White and I never thought I’d ever need to say that.

9. THE ONE ALBUM WHICH CHARTED AT JB HI-FI AND I ACTUALLY BOUGHT THIS YEAR: Bob Dylan – "Rough and Rowdy Ways" (Columbia / Sony)
To be fair, it doesn’t take a lot to get on their chart but because Brisbane has a distinct lack of boutique record shops which would stock his Bobness at the time of release, I not only bought the new Bob Dylan album from there, I got it on CD too. Physical formats are always okay with me – in fact, a friend of mine gave me a copy of the Velvet Underground’s 1969 live album on eight-track for my birthday; that’s how accepting I can be.

As someone who owns albums like "Down In the Groove" and "Under a Red Sky" it doesn’t take much for me to feed Dylan’s retirement fund and Sony’s multi-national corporate machine. Is it "Blood On the Tracks"? No. Okay, well is it as dreary as his Christmas album? No.

It’s understood that today the group primarily reside in a tiny town west of Brisbane called Ipswich which is a quaint little place full of old timber shacks. They began recording an album sometime last year (or perhaps even a year before that I heard this rumour from someone) their second album of all new material since the late '90s. I’m sorry but their discography to me is a touch difficult to understand; it’s like when I let Google maps take me and my car to somewhere I’ve never been. Was I meant to drive past that park twice in both directions? Why is it taking me across this toll bridge?

Their string of shows last year felt like long, soporific jams which oozed of the Velvets ca. 1966 with no less than four guitars chiming away to the most primal and selfless of rhythm sections. If that sensation could be placed across 2 sides of a record, that would be great. And if Yuri and Helen decided to do a country album of duets a la Conway and Loretta, I’d still buy it anyway. So let’s hope there’s some TGATF racket next year, eh bro?